My family loves spending time together outside and Banff National Park in Canada was the perfect place to get outdoors and breathe some fresh mountain air. For 5 days, my family of four, along with my sister and brother-in-law and their daughter, hiked in the mountains, drove winding roads, gaze upon lakes of the most incredible colors, saw moose wandering in town, and swam in a pool with a mountain backdrop.

Everything we did that week was great, but the one place that stands out most in my mind was our visit to Moraine Lake. Less famous than Lake Louise, but equally as beautiful. And a shade of blue that shouldn’t be natural but totally is. As soon as we pulled in, there was a rockslide right off the side of the parking lot. You got to it by first crossing a gap of fallen logs that were floating tightly packed on the water. We saw a bunch of people crossing the logs, then climbing and couldn’t resist doing it ourselves! Our girls (9 & 10) were so excited to get to climb something that was clearly not the safest structure in the world. Lol. We knew the view from the top would be worth the effort, and it was! Of course, once we’d scrambled up the steeper-than-I thought-it-would-be rock pile, we found a nicely manicured trail we could’ve walked. LOL. 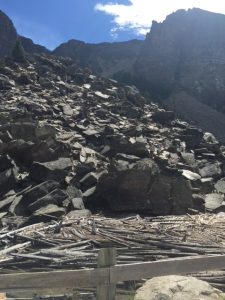 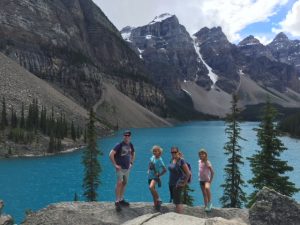 Seemed the rock pile wasn’t the only slightly dangerous thing we’d do that day. My husband remembered this one hike he took as a kid from Moraine Lake to Consolation Lake, so we’d built our day around doing the hike for him. And then we saw this: 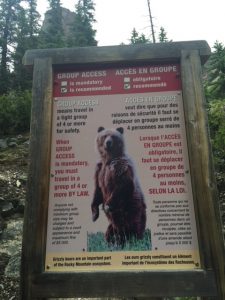 Clearly safe to travel with a group of 7, right? And only 3 of them were children… With bears in mind, we set off into the woods on a trail that was more deserted than any of the others we’d hiked. Seriously, we saw NO OTHER PEOPLE and we were out there for hours! My mama bear radar was on high alert the whole time. Despite the sign, we saw no bears. But we did find the gorgeous, and secluded, Consolation Lake with a huge rockslide of boulders! It was enormous! The pictures can’t really do it justice. Rocks were still breaking off the peak while we were there. It was a touch unnerving but so amazing! 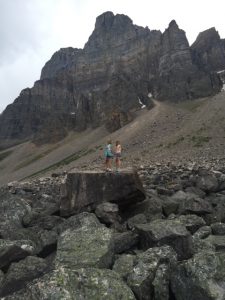 It’s been a couple of years since our trip, but we haven’t stopped talking about it as one of the best we’ve ever had. So great, my youngest says she wants to move there permanently. Who knows…maybe one day we will!

Pick up The Wedding Hoax by Heather Thurmeier for just 99¢! 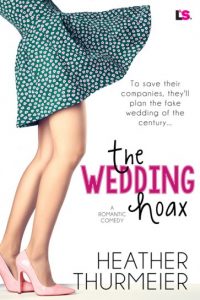 To save their companies, they’ll plan the fake wedding of the century…

Wedding dress designer Daisy Willows always imagined marrying the man of her dreams. The fantasy did notinclude a fake engagement or a fake wedding. Or that her ex, Cole Benton, would be the groom. But as her mom’s medical bills pile up, Daisy can’t refuse the help of a well-known bridal show expo owner…or his plan for the fake wedding of the century.

Cole Benton’s bridal magazine is on the verge of capsizing, taking Cole’s dream of an outdoor lifestyle magazine with it. So Cole agrees to the publicity stunt and becomes “engaged” to Daisy. But despite their searing-hot chemistry—both in public and in private—not everyone is buying the charade. And now the only way to save their skins and prove that their big white wedding isn’t a big white lie is to say “I do…” 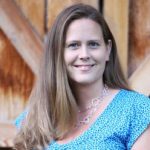 Heather Thurmeier is a lover of strawberry margaritas, a hater of spiders and a reality TV junkie. Born and raised in the Canadian prairies, she now lives in New York with her husband and kids where she’s become some kind of odd Canuck-Yankee hybrid. When she’s not busy taking care of the kids and pets, Heather’s writing her next romance, which will probably be filled with sassy heroines, sexy heroes that make your heart pound, laugh out loud moments and always a happily ever after. She loves to hear from readers on social media and her website!

How Do You Know When Your Horse is Listening? “Not only do we whisper to our horses, but we actually…