Hi, I’m Stefanie London, Aussie gal living in Canada. I love now being able to experience Christmas in winter! I had my first white Christmas ever when we moved to Toronto three years ago and it was truly magical. (I do miss my family a lot, but thank goodness for Skype!)

Since moving to Canada, Christmas is a very low-key thing in terms of gifts. We don’t send gifts back home (postage often costs more than whatever we might buy) and I personally think Christmas should be more about spending time with the people you cherish. My husband and I usually exchange something small, and on Christmas day we go to a friend’s house to drink and eat and enjoy each other’s company. 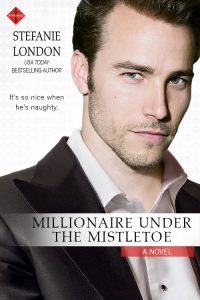 Something personal. Since Evan and Stella are both millionaires, they have all the material things they could possibly want. A gift would need to be something really special and sentimental. Or maybe the best Christmas gift of all is a few days in bed 😉

Stella and Evan actually shared their first kiss as teenagers under a piece of mistletoe! To replicate that special moment, Stella would sneakily hang a piece in the kitchen where Evan always makes a coffee and tea for them in the morning. That way she can sneak up on him for a sleepy, early-morning kiss.

She placed the first few ornaments on the tree, spacing them out evenly and creating a subtle pattern. He followed her lead and they worked in silence. Occasionally, she would move one of the baubles he’d placed on the tree, if it didn’t look right. The tree came together slowly, piece by piece.

They added the collection of old-fashioned wooden ornaments that matched the set that Stella had back home; each piece finding its perfect spot among the bristles of the tree. The angel, the drummer boy, the rocking horse, the reindeer—they all had a place.

“I always put the decorations up here,” he said. “Though the staff aren’t nearly as fussy as you are.”

“Nothing wrong with doing it properly.”

“Nothing wrong with a little mess,” he countered. “It keeps life interesting.”

What were they even talking about anymore? He didn’t know just how much he’d shattered her poor, virgin heart back then…or maybe he did.

“It doesn’t have to be complicated,” he said.

She opened her lips to reply but his hungry kiss enveloped her, hot breath filling her mouth where a protest should’ve been. He crushed her to him, one arm snaking around her shoulders so that there was nothing between them but the clothes on their bodies. He tasted of tea and cinnamon.

A groan passed between them as their tongues met, and Stella melted against him. His tongue danced with hers, probing and exploring her with a gentle yet insistent curiosity. She tilted her head back, feeling him catch it in one hand. His fingers tangled in her hair, tugging her head back farther so that he could gain greater access to her mouth.

She was dizzy with lack of air and the pressure of his body against hers. Beneath her T-shirt her skin tingled, alight with the long-forgotten feeling. Her nipples beaded against the lace of her bra and she ached. Everywhere, she ached.

It had been a long time…a very long time.

Pick up Millionaire Under the Mistletoe by Stefanie London for just 99¢!

Our Christmas in July celebration continues! If you missed our Scandalous 12 Days of Christmas post …