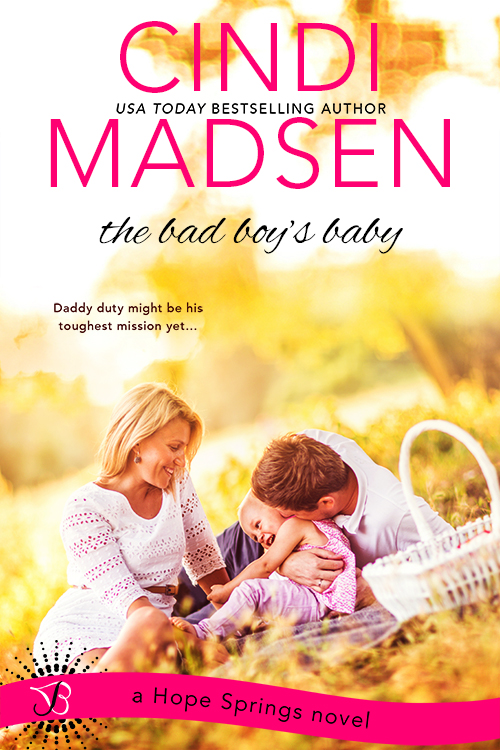 I like to wait until after Thanksgiving, and even more, until after my birthday on November 29th.

I haven’t even thought about it yet.

Looking for a great read this holiday season? Check out The Bad Boy’s Baby by Cindi Madsen 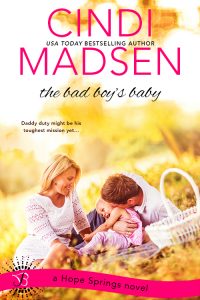 A weekend away from their cutie pie daughter.

Over the kitchen stove, so when they’re making Mac & Cheese for their daughter, who pretty much only eats that, they can sneak in some extra kisses.

Instead of turning to head up the trail like she thought he would do, he lowered his lips to hers. She wrapped her arms around him, getting blocked by his massive backpack for a moment before settling for holding onto the sides of his waist.

He still kissed her a little too carefully, so she decided to see what’d happen if she pushed it farther, even as nervous butterflies swarmed her stomach, mixing in with the happy, twitterpated ones. She slid her tongue inside and rolled it over his, releasing the moan that she’d held back.

Apparently it set something off inside him, because he drove his fingers through her hair, cupped the back of her head, and deepened the kiss. His other arm came around her waist, and he molded her tightly to him as he stroked her tongue with his, kissing her long enough to make the world around them spin.

When they broke the kiss, she gripped his arms, needing a moment to steady herself. Whoa. There were the reworks I was hoping for.

Cam rested his forehead against hers. “You keep kissing me like that, woman, and I’ll be tempted to pitch the tent right here and forget the lake.”

She bit back a smile. “But how would you demonstrate your fishing skills? After last weekend, I’m still not sure you have any.”

His mouth dropped. “I had a two-year-old sabotaging my attempts.”

“Sure,” she said, laughing. “Blame it on the two-year- old, not the fact that you were using the wrong bait.”

“You think your bait is better than mine?” She nodded. “That’s it.” He kissed her hard on the mouth, then took her hand and started up the trail. “Once we get there, it’s on. Whoever catches more fish owes the other…” He glanced at her, his eyebrows ticking together. Then mischief flickered in his eyes, and she wondered if she’d bitten off more than she could chew. “A striptease.”

Emma could feel the heat rising to her face. “Trust me, you don’t want a striptease from me.”

“That’s where you’re wrong,” he said, his husky voice echoing through her and putting her hormones on high alert. “But if you’re too scared…”

This is the passion I wanted—now it’s time to grab it by the horns and own it. “When I win, I expect dance moves with the stripping. Just so you know.”

He laughed, and they took off at a quick pace again, with her having to take two steps for every one of his strides. But now she had a new goal: she was going to catch as many fish as possible, because there was no way she was going to have to stand in front of Cam Brantley and do a striptease. Watching him strip, on the other hand…

She nearly tripped on the gnarled roots of a tree when she thought of all the muscles hiding under his clothes.

But once she recovered her balance, her goal remained the same: win at all costs and receive a show she was sure she’d never forget.

A sexy cowboy, neighbor and male romance author. We have something for everyone to kick off the new …