I’m Robin Covington and I love EVERYTHING about the holidays! I love the music and the food and decorations and the Hallmark Christmas movies and the general feeling that people actually have good will towards other people. It is my favorite time of the year – no question.

Favorite Holiday Song: I Heard the Bells on Christmas Day (when it gets to the part where it says “God is not dead nor does he sleep/the wrong shall fail/the right prevail/ with peace on earth good will to men” – I get teary every time.

Favorite Holiday Movie: Meet Me in St Louis with Judy Garland (it was the first time a movie featured the song, “Have Yourself a Merry Little Christmas”.

I listen to Christmas movie year round!

I have all my shopping done by the first week in December – Amazon and two-day prime shipping baby!

Looking for a great read this holiday season? Check out His Convenient Husband… 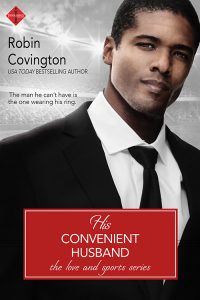 What would the perfect gift your hero would give your hero and why?

Isaiah would take Victor to Hawaii – he’s never really been to beautiful beaches and he’d want to give that to him.

What would the perfect gift your hero would give your hero and why?

Victor would give Isaiah a dance – choreographed just for him.

Victor smiled at that, shifting toward him, treading water. Isaiah let him close the distance, willing to see where this would lead. He didn’t know what it was about this man but it was there, undiluted by even the cool water.

“That’s cute,” Victor said, his hand brushing over Isaiah’s side. He expected to tense at the touch, he was so unused to it these days, but the reaction didn’t come. Instead he relaxed, leaning in to the touches hidden by the water.

“I’m not cute,” he argued lightly, knowing his tone lacked any heat to carry the day.

“Yes, you are,” Victor replied, shoving him back with a hand to his chest and then going under the water, surfacing behind him, really close this time. Close enough for their thighs to touch, chest to back. When he spoke, it was a teasing murmur in Isaiah’s ear. “Among other things.”

Isaiah spun around to face him, his hand finding smooth skin and allowing a lingering brush against a tight six-pack. “Thanks for staying to help clean up.”

“Well, everyone was here one minute and then they weren’t.”

“Yeah, I think Evan broke the sound barrier running out of here to go sleep over at his best friend’s house.” Isaiah laughed, not missing the brush of Victor’s leg against his own. “You were amazing with him. We’re close, but I don’t always get the artistic thing.” He thought about his son for a few moments and made an admission he didn’t often share. “I don’t always get the wearing dresses or makeup either, but…”

“But he’s your son and you love him and so you try,” Victor murmured, his body ebbing in the movement of the pool, moving against Isaiah in a way that only enticed him to reach out and drag him closer. “You’re a good father.”

“So, you don’t like it when a guy wears makeup?”

This close, he could see the rim of dark eyeliner around Victor’s eyes. It was subtle but effective, making his blue eyes appear huge and inviting. Makeup definitely worked on this man.

“Are you fishing for a compliment?” he asked, loving the flush that crept across his companion’s cheek. He had to trace it, lifting his hand and trailing a finger across the skin and tangling it up in a wet curl before he’d even realized what he’d done.

Victor let out a puff of surprise, leaning in to the touch as his voice went husky. “From you? Yes. I don’t think you give them often, though.”

“I don’t.” He let his free hand drift underwater, hooking behind Victor’s thigh and drawing him close, their bodies now working as one to tread the water. “But you’re a very beautiful man, no matter what you’re wearing.”

He let that sink in, loving the way Victor melted into him, wrapping around him with his legs and arms. Their bodies slid against each other, the water making even their hair like silk, and Isaiah didn’t miss the sigh that escaped the man when their cocks pressed together. Victor’s lips brushed his own, just a hint of skin on skin but full of invitation.

“So are you going to kiss me or not?”

Get Your Copy of His Convenient Husband

1 Reply on Entangled Under the Mistletoe with Robin Covington