The Best Mac & Cheese You’ve Ever Had with Tristina Wright

Who tried it: Tristina Wright, author of 27 Hours

Okay, pull up a chair or a pile of pillows because I’m gonna tell you a story about the best damn mac & cheese I’ve ever made.

Once upon a time, I gathered together these ingredients (which are measured out in the back-ass-wards american fashion but a quick look on google will provide you with the clearly superior measuring units you’ll need for those of you not in this country…i.e. where I probably want to visit…)

Got all that? Excellent.

Got all that? Excellent. Now find yourself about a 4-cup baking dish. Casserole dish. Baking pan. SOMETHING THAT WILL ADEQUATELY HOLD THE CHEESY GOODNESS AND SURVIVE THE HELLFIRE THAT WILL BE THE OVEN.

Grease that sucker up because you don’t want any of your magical mouthgasmic creation to stick to it, amirite?

The easiest part of this entire endeavor will be the macaroni. Follow the box directions. Boil it in SALTED water, drain it, set it to the side.

Crisp up those slices of bacon in a good-sized sauté pan. You want to be able to chop them later. Put the bacon on a paper towel lined plate to dry BUT DO NOT DISCARD THE DRIPPINGS FROM THE PAN.

Those onions you meticulously diced to nubbins? Throw them in that grease.

Stir those puppies until they’re happy and floppy and kinda see-through…about 5 minutes. Add that tbsp of oil and throw in the garlic. Your kitchen will smell amazing but keep going.

Take your flour and whisk it into your bacony onion garlic mixture and keep stirring it for about a minute until everything is all nice and coated with flour.

Slowly stir in your milk.

SLOWLY. You don’t want flour clumps. You want the flour to dissolve happily like a sugar lump in warm tea on a cold day.

Should take you about five minutes. It’ll start to get thick and happy. Turn off the heat.

Add your cheese by handfuls, stirring and letting the cheese melt before adding another handful.

Do not drink the cheese sauce. I know. It’s so damn tempting. But do not do it. The roof of your mouth and the top three layers of your tongue will thank you.

Add that Dijon mustard and mix it up.

REMEMBER THE BACON AND MACARONI?

Dump those puppies into your baking dish. Make sure they’re all mixed up and getting to know each other real well, mkay?

Stir that up, let it coat the pasta and the bacon and fill in all the little holes with its gooey deliciousness.

In a bowl you’d use for cereal or other such paltry foods, mix up the bread crumbs, that bit of oil, parmesan, and parsley. Get your hands in there and make sure it’s all coated and glistens like freshly fallen snow in the sunlight.

Sprinkle that bad boy all atop your pasta like a blanket.

Now slide that wonderfully heavy goodness into your oven and bake it for about 10-15 minutes or until the top is as golden as a ripe wheat field and the cheese is bubbling around the edges like the world’s most amazing dairy hot tub.

When it is slightly below the temperatures of hellfire, shove it into your face.

With all that extra time not spent in the kitchen, what’s Callie currently reading?

When I’m writing in one category/genre, I oftentimes can’t read the same one, so while I’m working on the sequel to my YA SF, I’ve been reading a lot of adult romance. Currently I’m rereading Santino Hassell’s INSIGHT, the first in his queer paranormal The Community series, because the third (and final!) one just came out and wanted to a full reread all the way through. It’s just that good. It’s phenomenal. Y’all seriously need this trilogy now. 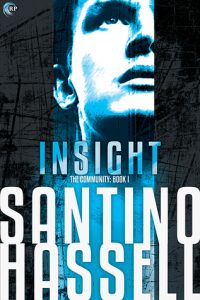 Growing up the outcast in an infamous family of psychics, Nate Black never learned how to control his empath abilities. Then after five years without contact, his estranged twin turns up dead in New York City. The claim of suicide doesn’t ring true, especially when a mysterious vision tells Nate it was murder. Now his long-hated gift is his only tool to investigate.

Hitching from his tiny Texas town, Nate is picked up by Trent, a gorgeous engineer who thrives on sarcasm and skepticism. The heat that sparks between them is instant and intense, and Nate ends up trusting Trent with his secrets — something he’s never done before. But once they arrive in the city, the secrets multiply when Nate discovers an underground supernatural community, more missing psychics, and frightening information about his own talent.

Nate is left questioning his connection with Trent. Are their feelings real, or are they being propelled by abilities Nate didn’t realize he had? His fear of his power grows, but Nate must overcome it to find his brother’s killer and trust himself with Trent’s heart. 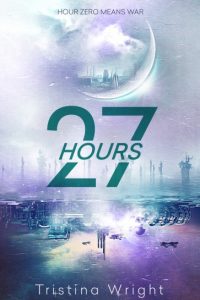 Rumor Mora fears two things: hellhounds too strong for him to kill, and failure. Jude Welton has two dreams: for humans to stop killing monsters, and for his strange abilities to vanish.

Nyx Llorca keeps two secrets: the moon speaks to her, and she’s in love with Dahlia, her best friend. Braeden Tennant wants two things: to get out from his mother’s shadow, and to unlearn Epsilon’s darkest secret.
They’ll both have to commit treason to find the truth.

During one twenty-seven-hour night, if they can’t stop the war between the colonies and the monsters from becoming a war of extinction, the things they wish for will never come true, and the things they fear will be all that’s left. 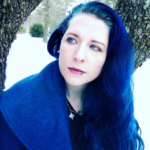 Tristina Wright is a blue-haired bisexual with anxiety and opinions. She’s also possibly a mermaid, but no one can get confirmation. She fell in love with science fiction and fantasy at a young age and frequently got caught writing in class instead of paying attention. She enjoys worlds with monsters and kissing and monsters kissing. She married a nerd who can build computers and make the sun shine with his smile. Most days, she can be found drinking coffee from her favorite chipped mug and making up more stories for her wombfruit, who keep life exciting and unpredictable.

CALL FOR SUBMISSIONS Why do fools fall in love? Some say it’s because spring is in the air, an…

Please welcome Eve Devon, the author of The Waiting Game, for a little bit of Straight Talk! How do …

Throwback Thursday: First Love by Brooklyn Skye       I have to admit, when I set out…