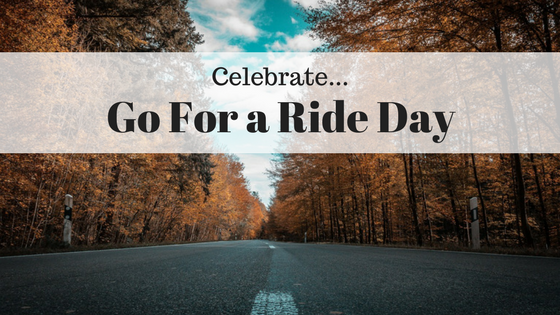 Whether you hop into your car, dust of that bicycle, or simply get your walking shoes get out there and explore! If you can’t get away we have some great road trip books that will take you away.

Driving Her Crazy by Kira Archer

Cher Debusshere hates being the black sheep of her posh, well-to-do family almost as much as she hates driving—which is exactly what she’s forced to do when her flight home for her perfect sister’s wedding is grounded. Fan-freakin’-tastic. Then a hot guy offers to share both the car rental and the driving duties…only to drive her crazy by assuming she’s just some spoiled little rich girl.

Mechanic Nathaniel “Oz” Oserkowski is about as blue-collar as they come. There’s never been a time he hasn’t worked his ass off, and he’s determined to prove it to the gorgeous princess in the passenger seat.  As the miles pass, they bait and needle each other…until their lust and longing gets so hot it nearly overheats the engine.

They have nothing in common. Hell, they can barely stand each other. But sometimes it takes a journey to change the destination…

Her Accidental Husband by Ashlee Mallory

Once upon a road trip to Mexico…

Payton Vaughn’s trip to Puerto Vallarta for her friend’s wedding was her big escape from her ridiculously overbearing mother-oh, and that little matter with her cheating fiancé. Now, her flight’s been cancelled, and she’s crammed into a tiny car with the gorgeous-but-irritating best man.

Cruz Sorensen doesn’t have time to babysit some spoiled socialite, even if she is the future daughter-in-law of the man who could change the fortune of his family’s company. He has no business getting to know her better-not even for all the tequila in Mexico…until they wake up with grande-sized hangovers as man and wife.

Now Payton and Cruz must decide if they’ve reached the end of their journey…or the beginning of a new adventure.

The One That Got Away by A.J. Pine

How far will one man go for the woman he’s loved since high school?

I’ve been in love with my best friend for as long as I can remember. I tried to tell her in high school, which royally backfired. Ten years hasn’t changed things, but now I’m finally ready to lay it all out on the table. The only problem? She’s got her sights set on someone else.

I made the mistake of letting her go once before. This time, I’m going to prove that the only guy she needs is me.

We’re best friends—nothing more—and it’s good like this. That’s what I’ve been telling myself since the night in high school when we shared a single kiss, a night that was great—but then wasn’t. Now we’re on a road trip to California, and he’s surprising me at every turn—helping me overcome my fear of heights, belting out my favorite Monkees song, and looking way sexier with his shirt off than a best friend is supposed to.

But admitting how I feel may mean losing our friendship. I thought I’d find happiness in California, but now I’m wondering if the right guy for me has been by my side all along.

Tempted By the Soldier by Nicolette Day

When one touch isn’t enough, why resist?

Road trips are supposed to be fun. Or, at least, full of hot sex. For photographer Lilly Grayson, the fifteen-hour drive to her friend’s wedding with Nate Jennings will be neither. Not that Nate isn’t sexy—the man is six-foot-three-inches of mouth-watering Marine. But Lilly’s been there, done that…and he walked away. Now it’s time for a little payback. The kind that’ll make a man desperate for a taste of what he can’t have.

And Nate wants a taste—so badly that he can barely keep his hands on the wheel. But the scars and ghosts of his last tour still haunt him. He can’t give into temptation, not this time. Lilly deserves a whole man—one who can love her the way she deserves to be loved, even if she doesn’t believe it can happen. And that can’t be Nate. Not when he’s leaving again in two weeks, and this time, he’s not sure he’ll return…

When a handsome man from Gabby’s past agrees to a cross-country road trip, her master plan to re-launch her art career quickly morphs into an unexpected, romantic reunion.

Make way on your virtual book shelf (we love how easy that is!) because the April Indulgence titles …