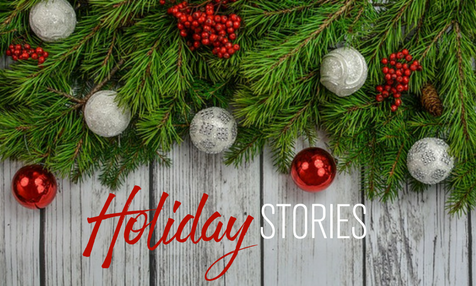 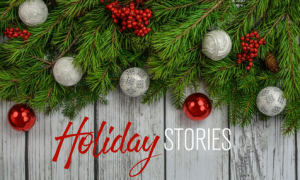 Stranded at an Inn on Christmas Eve by Callie Hutton

Leaning heavily on Braeden’s arm, Sarah entered the main room of the coaching inn. Thank goodness a strong fire had been built up and the place was warm. She stiffened as another pain shot from around her back to her belly. She glanced up at her husband to see if he had noticed, and breathed a sigh of relief when he seemed focused on the innkeeper who approached them.

“Ach, good afternoon, sir. ‘Tis a nasty day out there for sure, and I see from yer coat that the snow has started.” The innkeeper made a quick bow, the directed them to a table near the fireplace. “Will ye be needing a room?”

“I dinna think so. My lady wife and I are on our way to visit her sister at Bedlay Castle, but ‘tis taking longer than we planned. She is feeling poorly and I thought we could stop for some tea and perhaps a small meal.” Braeden helped her into the small wooden chair, which she eyed skeptically, not sure if it would hold her bulk.

“Aye, I can serve ye a fine lamb stew my wife has simmering in the kitchen, along with a nice pot of tea and warm bread.. ‘Tis a good thing ye aren’t in need of a room because we dinna have one available at present.” The innkeeper glanced quickly at Sarah’s protruding stomach and said, “Looks like ye have a little one on the way.” He narrowed his eyes. “Verra shortly.”

Sarah held in the groan as once again her stomach muscles tightened. She hadn’t really wanted to stop, preferring to continue on to her sister’s home since it appeared the babe was anxious to make its appearance, but Braeden had insisted. She feared if she told him why she wanted to persist in their journey he would have panicked, and made things worse.

“Are ye feeling all right, lass? Ye look a little pale.” Braeden hovered over her as he helped her remove her pelisse. Sarah glanced at her belly and marveled once again at the life contained therein. As she was wont to do of late, tears gathered at the thought of the babe. A white linen handkerchief appeared in front of her eyes which she used to wipe her wet cheeks.

“Aye lass, for sure yer a watering pot these days.” Braeden took the chair alongside her and clasped her hand in his. “I ken ye wanted to hurry to yer sister’s, but I think ye need some time out of the carriage and a cup of tea to restore ye.”

She patted his hand. “Yes, you were right.” Sarah sucked in a breath and gripped Braeden’s hand with such force he winced.

“What?” Panic already graced his voice.

Sarah let out a slow breath and said, “I think the babe might be eager to meet his parents.”

His eyebrows rose to his hairline. “Now?”

Braeden jumped up, knocking his chair over. “Innkeeper!” He ran his fingers through his hair. “Are ye sure, lass?”

Sarah gave him a slight smile and nodded once again. “Yes, I believe so.”

Despite her fear and pain, Sarah burst out laughing. “I have no control over this.”

The innkeeper hurried in, a stout woman wiping her hands on a stained apron behind him. “What is it, sir?”

The innkeeper stood before them, wringing his hands. “I’m verra sorry, sir, but I have no more rooms.”

Sarah covered her face with her hands and groaned.

“What? What?” Braeden was near hysteria. What in heaven’s name happened to her clear, calm husband?

“Do you not see the humor in this?” Sarah bit back her laughter at the tense expression on her Braeden’s. She doubted he would find humor in this at all.

“What are ye talking about, lass? What’s funny?”

She placed her hand on her aching back. “It’s Christmas Eve, I’m about to deliver a babe, and there is no room at the inn.”

He stared at her as if she’d lost her mind. She could almost see him re-playing the words in his head, trying to make sense of it. When he continued to stare, she waved at him. “Never mind. I’ll explain it another time.” Where was her genius husband when she needed him?

The innkeeper’s wife stepped up to her. “I am terribly sorry about the lack of a room, my lady. ‘Tis not my intention to insult ye, but ye are more than welcome to use—“

“The stable?” Sarah burst out laughing just as a pain hit and her mirth turned into a very loud groan.

“Nay, my lady!” The woman gasped. “I would never put ye in with the animals.”

“And it has already been done,” Sarah mumbled. Did no one except her see the irony of the situation?

“I can let ye make use of our bedroom, behind the kitchen. ‘Tis not much, and again I apologize, and dinna mean to offer ye insult, but at least ye can have privacy.”

Braeden gripped Sarah’s elbow and helped her up. “That would be fine, madam. My wife and I appreciate your consideration.”

Sarah walked slowly behind the woman, Braeden’s arm wrapped securely around her shoulders. He leaned in close to her ear. “Couldn’t ye have waited just a few more hours, lass?”

It had been hours since the midwife had arrived and remained cosseted with Sarah in the small bedroom at the back of the inn. Braeden walked the boards under his feet in front of the fireplace, amazed he hadn’t worn them out. Over time, Sarah’s moans had turned into screams and cuss words he had no idea his wife kenned. He’d decided two hours ago he and Sarah would have a celibate marriage going forward.

The front door of the inn opened and Sybil, Liam, and his mother barreled through. “We left as soon as we received your message. Has the babe been born yet?” Sybil shrugged out of her pelisse.

“No.” Braeden rubbed the back of his neck. “I dinna ken how much longer she can last.”

Sybil rested her palm on his arm. “It is terrible to listen to, but all will be fine. Trust me.” She pulled off her gloves. “Where is she?” A loud scream echoed through the room. “Never mind. I believe I can find her.”

Sybil and Lady McKinnon hurried to the back of the inn.

Liam slapped Braeden on the back. “Let’s have a bit of whiskey to celebrate the arrival of the bairn.”

Braeden shook his head. “Nay. I have to keep a clear head.”

The two men sat in silence, with Braeden hopping up and down to pace for another hour before Sybil entered the room, her face beaming. “Braeden. Go meet your babe.”

He jumped up, and once again his chair went flying. “It’s over?”

When Sybil nodded, he shouted. “Praise the Lord!”

Sarah rested against the propped up pillows, her hair plastered to her damp forehead, but with a smile on her face. She held a small bundle that moved as he stared at the sight. Cupping the babe’s body with one hand she held out her arm. “Come say hello to your son.”

He sucked in a deep breath. “A boy?” He felt the sudden need for the handkerchief he’d given her before.

Braeden sat alongside her and gazed at the face of the beautiful child he and Sarah had made together. Truly a miracle.

The door to the bedroom eased open and Sybil, Liam and Lady McKinnon entered. Each carried a gift for the child. Sarah shook her head. The entire night was becoming surreal.

Even though it was the middle of the night, with no rooms available, the visitors returned to Bedlay castle with a promise from Braeden that he would bring his family to them as soon as they were able.

The innkeeper’s wife insisted they stay in their bedroom until the next day when two rooms would become free. They were more than happy, they said, to sleep by the warm fireplace in the kitchen for the few hours left to the night.

About an hour after things had settled down, exhausted, but unable to sleep, Sarah gazed at the face of her child tucked in between her and her sleeping husband on the bed. She ran her finger over the fuzz of the baby’s head, then glanced out the window.

A lone bright star shone overhead in the sky, winking down at her. The end of a perfect—albeit very strange—night. 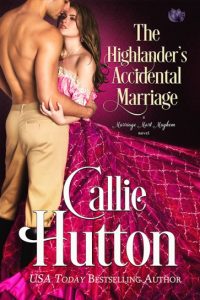 She never intended to take a husband…

Lady Sybil Lacey is every inch an English woman. She’s horrified her best friend is wedding a barbarian Scot. For aren’t Scots naught but brutish, whiskey-swilling lechers? So to find herself secretly attracted to the tall and devastatingly handsome Scottish laird of Bedlay Castle is quite disconcerting…

Liam MacBride is convinced that English ladies are silly sassenachs who think of nothing but social events and clothes. So why is he intensely drawn to Lady Sybil? All they do is quarrel…until loathing turns into undeniable lust.

A tempestuous, fiery romance between an English lady and a Scottish laird cannot end well. 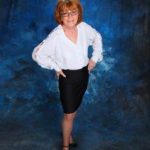 Callie Hutton, USA Today bestselling author writes both Western Historical and Regency romance with “historic elements and sensory details” (The Romance Reviews). Callie lives in Oklahoma with several rescue dogs, two adult children, a daughter-in-law, twin grandsons and her top cheerleader husband (although thankfully not all in the same home!). Living in the Midwest provides plenty of opportunities for Callie do pursue her interests: researching history, meeting readers, spending time with her adorable two year old twin grandsons, and discovering new adventures. Callie loves to hear from readers and welcomes the opportunity to become friends, both in person or virtually.

Celebrate Go For a Ride Day!