The scene: Culinary school. 1996. A studious woman sits in the front row. A dude sits in the row behind her. She doesn’t notice him. Class begins.

Dude (leaning over her shoulder): Does this tie match my pants?

Woman (irritated by the interruption): Uh…sure?

As it turned out, he’d gotten dressed in the dark that morning and didn’t want anyone to think he was color blind. Or something like that. I honestly didn’t care. I didn’t give him a second look because I was a serious, hardcore, front-row nerd. In fact, I didn’t notice him until later when I was looking for a gym to join, and he piped up and said he had a free pass to the one next door to the school. Even then I didn’t really look at him. But I took the free pass.

When did I notice my future husband? When I was running on the treadmill at that gym, and he walked by half-naked. Okay, fine—he was wearing a thin, cut-off T-shirt with no sleeves. Holy shoulders, Batman! The most beautiful ones I’d ever seen in real life.

I never expected to fall in love with him. Nor did I expect that lousy pick-up line, the one he’d crafted to get the attention of the “hot” girl in the front row in a non-creepy way, to become part of our history. By the end of culinary school, I was a back-row, note passing, starry-eyed, sexed-up wreck of my formerly studious self. I knew every inch of those super-heroic shoulders as well as the man attached to them. Eighteen years later, I still do.

However…I insist the heroes in my books come up with sexier pick-up lines. Quinton James in MAKE ME, TAKE ME isn’t trying to hide his intentions. The attraction that sparks between Betsy and him when they meet is undeniable. He sits down at the French Quarter bar to order his drink, and puts it right out there: “Bakers, a double, with a little ice. Then water with lime until your shift ends. Unless you can leave now?”

Betsy Mouton has much the same response I did, and now you know how well that turned out… 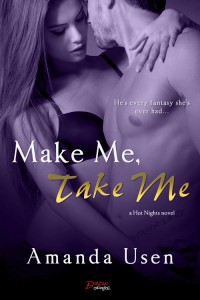 Find out more about MAKE ME, TAKE ME

Under the Mistletoe with Jodi Linton

I can almost hear people asking it.  Heck. I ask myself the same question all the time.  How does a …