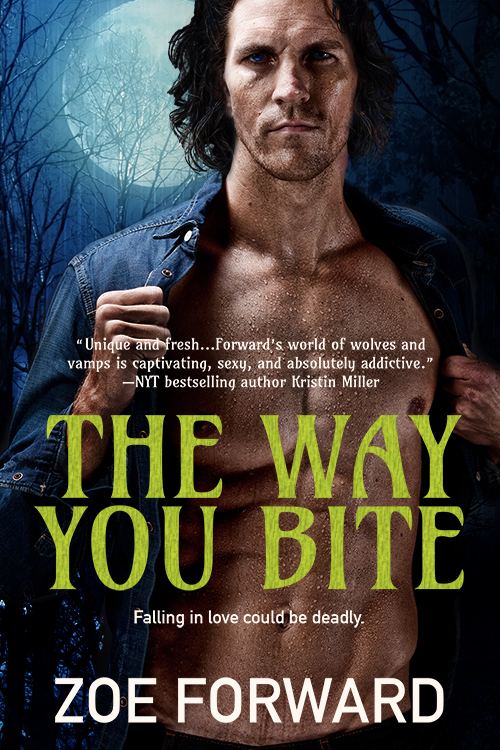 The Way You Bite by Zoe Forward

“I can’t resist.” Lexan bent his head toward her. He pressed his lips to hers and lifted away. She shivered.

“We can’t do this on so many levels,” she whispered. But I don’t care. She leaned forward and stroked her tongue over his lips until his mouth opened. His body shuddered, and his breath hitched when her tongue tangled with his. His mouth moved on hers, deepening the kiss.

“You’re dangerous,” she muttered. She’d never been more conscious of being almost naked beneath a fully clothed male with the single motivation of getting him undressed.

“I am more dangerous to you than you could imagine, especially right now. We shouldn’t. You’re right. But I want to.” He shifted over her, pressing her farther back on the bed beneath him. One hand caressed her waist and slowly moved southward. He had superb control. His large body didn’t come close to squashing her. He fit himself against her with precision pressure on the right zones. Normally, a submission attempt from an alpha male ignited her instinct to fight, but from Lexan she melted, boneless and floaty, while his kisses continued. He caressed here and there until she found herself desperate between touches.

He kissed her neck over her jugular. She moaned and arched her neck toward his mouth when he continued kissing the most erogenous zone for any vampire. No male ever made her feel this wanted. Sexy. Wild.

“Damn, you’re beautiful. What you feel right now will become addictive. The more we touch, the worse it’ll get. Tell me to stop.”

“It’s not as addictive for you?” She caressed his erection.

He hissed. “If you don’t tell me to stop, I’m going to make you come. After that, you’ll want more, which can’t happen. It’s better for both of us not to have even a taste of this.”

At the suggestion her thighs locked around him as her core spasmed. “You think a lot of your skills, don’t you?”

“This is nature, not skill.”

Her eyes locked on the arch of his neck as his kisses descended toward her chest. Oh, to bite. She longed to taste the forbidden port pounding through his distended jugular vein. One taste would kill her. Not a pretty death. She’d seen it. Bleeding out everywhere. Like a splash of cold water, she pushed him away and slid off the bed. She snagged her bathrobe out of the closet and pulled it tight around her. “Get out.”

Confusion swirled in his gaze as he pushed up off the Bed.

She pointed at him. “I figured out your game. Fool me into taking a bite. Then I die. I’m not stupid. If you want me dead, just do it. I’m sure I’ve got a weapon around here somewhere you can use. I’d prefer you killed me that way, not with blood death.”

“There’s no game going on here. If I wanted you to die, I wouldn’t have helped with the knife wound.” He strode to her. She backed up until the wall cushioned her back.

He slapped a hand on the wall on either side of her head, caging her in. He leaned into her, dominating but not cruel. Excitement streaked through her.

Hoarsely, he said, “There’s you wanting this, and me wanting you back. Whatever’s going on here doesn’t happen every day. It’s real. It’s stealing my fucking mind. And, it’s a hell of a mess.”

Okay, that was…hot. No one had ever told her she was stealing his mind.

Pre-order your copy of The Way You Bite Now! 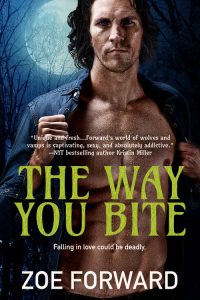 Her father, North American head honcho vampire, has threatened a chilling or else if she “accidentally” helped a wolf again, especially since they’re at war. But she’s tempted by the sexy wolf. And his deadly blood calls to her in a way that should set off warning bells…

A promise to his brother in arms obliges Lexan Dimitrov to rescue the aristocrat vampire before her family discovers her secret—a secret Vee herself isn’t even aware of. What he didn’t expect was to find her sexy-as-hell. He’s not into vamps, yet the inescapable heat building between them is a delicious temptation guaranteed to end in total disaster. 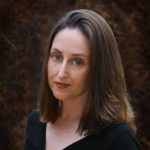 Zoe Forward is a hopeless romantic who can’t decide between paranormal and contemporary romance. So, she writes both. When she’s not typing at her laptop, she’s tying on a karate belt for her son or cleaning up the newest pet mess from the menagerie that occupies her house. She’s a small animal veterinarian caring for a wide range of furry creatures, although there has been the occasional hermit crab.

She’s madly in love with her globe-trotting conservation ecologist husband who plans to save all the big cats on the planet, and happiest when he returns to their home base.

Join the “How Brazen are you?” Facebook Party. —- The party is starting tom…