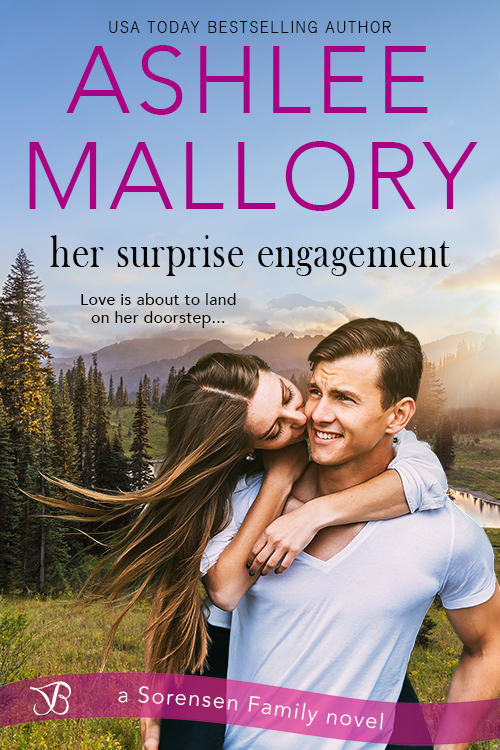 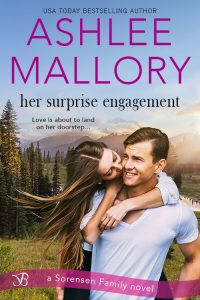 Have you picked up your copy of Her Surprise Engagement by Ashlee Mallory yet? Don’t miss this fake engagement, sweet romance!

She let the sand sift through her fingers one last time and clapped her hands together to wipe them off.

She nearly jumped when Jack’s warm hand dropped over hers. Strong. Assuring. She raised her gaze to his, finding that he’d taken his glasses off so she could see into the depth of those brilliant blue eyes. “You were young and in love and wanted to believe in the best in people,” he said almost softly, but there was force behind his words. “That doesn’t make you an idiot. If anything, I see a woman who’s had to bear a lot of trouble and pain all on her own and who, despite that, has come out on the other end even better. Stronger. With three smart, respectful, adoring kids to show for it.”

It might have been the nicest, most heartfelt thing anyone had ever told her, and tears she hated to shed rose in her eyes as she looked away. But Jack wasn’t having it and tilted her face back toward him. A tear must have slipped because his hand was wiping something from her cheek.

“I mean it. You don’t seem to realize what an amazing woman you are and you deserve to hear that from someone each and every day.”

How could someone she barely knew have the ability to speak so directly to her heart? Her chest quivered as she tried to catch her breath, still unable to draw her gaze from his.

“Dad?” Lily shouted, and immediately Daisy pulled her hand away from his, missing it the moment she did. “After this, can we head to Emerald Cove to see that old house?”

“Why not?” he called back. “And if we plan it right, we can eat at that little restaurant on the pier you love.”

“I think there’s even a movie night on the beach later we can all go to.” To Daisy, he added more quietly, “That is if you’re not all sick of us by then.”

Sick wasn’t exactly the word that came to mind. Quite the opposite, really.

She smiled, realizing for the first time that maybe, just maybe, her heart was ready to move on from Leo sooner than she thought.

“I think I could tolerate you for a little longer.”

Single mom Daisy Sorensen doesn’t believe in fairytale endings—at least not for her. All she wants is to enjoy a much-needed, stress-free family vacation at a friend’s Lake Tahoe home. So of course everything that can go wrong does. Including a gorgeous man and his daughter showing up in the middle of the night.

Soon-to-be Governor Jack Harrison has had a crazy week, but he’s sure nothing can top arriving to find a bathrobe-clad, beautiful stranger in the home he’s staying in for the week. He’s wrong. When things spiral out of control the next morning, Jack makes Daisy an offer she can’t refuse. She’ll pretend to be his fiancée and he’ll help her open the bakery she’s been dreaming about.

But in between late-night campfires and days on the lake, Jack finds himself falling for the strong, stubborn woman for real.

#TeaserTuesday: A Taste of You by Teri Anne Stanley

For this Music Monday, I recount the songs that went through my head when writing The Butterf…