I’m so excited to be on the Entangled blog for the holidays! My Lovestruck rom com Falling for Mr. Wright is a holiday romance full of sweet and sexy fun and cheer. I love writing winter romances that I often joke that it is Christmas in my head all year round!

It Must Have Been the Mistletoe by Barbara Mandrell

I love Christmas cookies, so much I included that little tid bit in my author bio when I was first published in 2013. My mom’s fudge is my all-time favorite, and I’m going to be posting the recipe on the Entangled blog soon. Be on the lookout!

I am a huge Hallmarkie, and the first day of the Hallmark Channel’s Christmas Countdown it is on! My favorite Hallmark movie is Crown for Christmas with Danica McKellar and Rupert Penry-Jones. Everyone should watch it because it’s soooooo Christmasy!

Break out the tinsel! Forget post-Halloween candy sales, I’m shopping in the Christmas section of Target on November 1!

I shop during the holidays. I love swinging by Starbucks for a peppermint mocha latte and then hitting the sales.

Looking for a great read this holiday season? Check out Falling for Mr. Wright by Robyn Neely 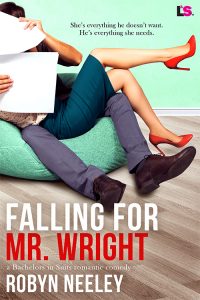 Ryan gives Sarah a super sweet Christmas gift, but then he realizes he needs to make an even bigger gesture if he’s going to show Sarah how hard he’s fallen for her. He does it in a super cute way that involves malt balls, a Christmas tree branch and a pink Eskimo hat, and it’s flippin adorable!

Definitely, most definitely, in the break room. It’s where they’ve spent hours having lunch together, laughing while splitting one of Ryan’s sister’s deserts.

In this scene, Sarah accompanies Ryan home to Connecticut to attend an awards gala at his former high school. They wind up alone on the football field where Sarah suggest Ryan show her his quarterback moves.

Ryan cocked an eyebrow. “You want me to tackle you?”

Sarah looked down at herself. Whoops. “Okay, maybe just don’t let me win so easily.”

“Okay.” He motioned her to get back into position down the field. “Get ready.”

“I should warn you,” she called to him. “Before I fed the chickens in high school, I ran two miles each morning.”

“Noted.” Once again, he lobbed the ball in her direction. Knowing he’d follow, she grabbed the ball out of the air and ran as fast as she physically could in her dress. Ryan caught up a little too quickly for her liking, so she dodged right and then quickly faked a left, throwing him off just long enough to dash straight for the end zone.

Before she could celebrate victory, Ryan grabbed her waist and lifted her off the ground. “I win, I win!” she shrieked between laughs. Ryan gently put her down and she turned around, standing inches from him. “See? I wouldn’t have lost you a game,” she said, hugging the football.

“Nope,” he said, not moving from his spot. Maybe it was the champagne, or maybe it was her pesky new football-player fantasy, but she stepped closer into his space.

“Are you going to show me how you celebrated touchdowns? I’d love to see you do one of those funny dances players do.” “I could do that.” He touched her cheek with his knuckle, letting it linger. “But I’d rather do this.” He leaned down and brushed her lips with his.

Just a simple touch of warm, soft skin that left her drifting forward. And then it was over. Ryan pulled back, his eyes hooded, his gaze hypnotizing. She clutched the football and blinked up at him, her mind swirling with a thousand thoughts.

At the top of the list? Holy crap. Ryan Wright just kissed me. Followed quickly by, I want him to do it again. No. Bad idea. Ryan was her colleague. Her friend. Kissing him would ruin everything. She’d have to quit her job because no way could she pretend like nothing happened, and it would hurt too much to see him, knowing a momentary lapse of judgment cost her their relationship.

She willed herself to step back…and failed. What are you doing? You’re supposed to want Logan. You’re here, at this gala, for Logan.

But was she? When Ryan invited her, Sarah had been prepared to say yes before he even mentioned Logan. She’d never had as much fun with a guy in her life as she’d had with Ryan the past year. He was incredibly hot, apparently thought she was hot, and was by far one of the most thoughtful and charming men she’d ever met. He’d rescued a kitten at the expense of his arm, for God’s sake.

Did she mention he was hot?

Screw it. One more kiss—just a little one—wouldn’t hurt anything. “Sarah, I’m sor—”

She spiked the ball and tugged Ryan back down. His immediate groan sent thrills skittering across her chest, and lower. His mouth fit over hers perfectly and, oh God, that only added to her desperation. She parted her lips, inviting him in, needing to taste him. She might die if she didn’t.

So much for a little kiss.

Wishing you and yours the merriest of holidays! XX, Robyn 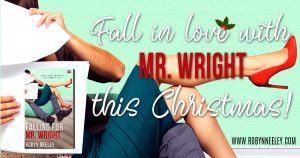 Entangled Under the Mistletoe with Kadie Scott

I do a lot of traveling these days, not just on Tuesdays, and I’ve seen phenomenal things whi…