I’ve been a fan of Diana Gabaldon’s epic Outlander series for years. Jaime and Claire were so fully formed as characters in my mind that when I found out the books were being made into a TV show I was more than a little nervous the production would never truly capture the nuances of this epic pairing and the life they’d made for each other.  A life that literally spanned time and space.

When Claire, as the headstrong, no nonsense WW II nurse gets dropped in 18th century Scotland, the scene is set for action, adventure, and eventual romance with the young, handsome highlander with a price on his head. I love that their relationship is based on quiet attraction, followed by a series of events that force them to build trust with each another.  Once their marriage of convenience is arranged, they’re already half in love with each other and it doesn’t take much to push them over the edge into full-fledged super couple territory.

What makes me super swoony is that Jamie just believes Claire. When Claire reveals she’s from the future, he doesn’t doubt her, he doesn’t question her sanity.  He just quietly accepts it and they get on with things.

If my heroine Senna shipped anyone I think it would Drago and Daenerys from Game of Thrones.  For all of Drago’s super ultra-alpha maleness, at the end of the day he is tamed (I mean, not completely) by his perfect match in purchased bride Dany.  They forge a relationship and find a passionate love in a violent, scary world.  I think Senna would identify with a woman thrown into a culture she doesn’t understand and all of the challenges that go with that.

Plus…I’m pretty sure she’d like to watch gifs of Jason Momoa as much as I do.

His Family Of Convenience 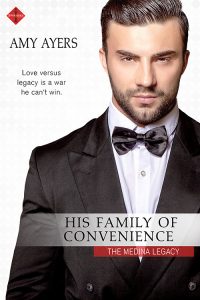 Senna Callas’s one-night stand with her alpha asshole boss, Marco Medina, was supposed to mark the end of her internship and their ridiculous attraction. After being unreachable and ignoring Senna for a year, Marco sweeps back into the country and summons her to his office, revealing he knows her secret…the secret created during their explosive night together.

Marco is determined to be there for the son he’s just discovered he has, but when it comes to being with Senna, his choices aren’t his own. His meddling family expects him, the firstborn son, to follow through with the arranged marriage set up when he was a child. And Senna has no plans on being his mistress and still resents how her attempts to contact Marco were ignored. The only thing going right between them is the attraction that burns no matter the complicated situation they’re in.

Marco would do anything to protect his family, anything except decide between the legacy he was born into and the young family he’s just found… 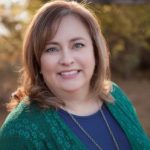 Amy Ayers remembers writing her first fiction as an introspective tween in rainy Portland, Oregon. She took a break from writing to move with her family to the desert of Phoenix, Arizona. She graduated from the University of Arizona with a degree in Journalism and a minor in Women’s Studies and is proud and is a proud Wildcat. She has worked as an Editor, a Job-Skills Trainer, and as an Executive Assistant. She even spent a college semester writing articles for the Tombstone Epitaph in the town ‘too tough to die’ .She currently divides her time between her writing, her family (including one husband, four boys and two dogs), and her far too lengthy daily commute to work. A life-long lover of literature, she began writing her own contemporary romance in earnest in 2014 and is thrilled to be published with Entangled. She hopes to win the lottery someday so that she can devote all of her time to writing; until then, she writes when she can.

Everything to Make Him Yours at Midnight Happy New Year! To celebrate the start of the New Year, Tar…