Fun Fact: I’m not like most authors who create playlists that inspire the stories that I write. In fact, it wasn’t until about a year ago that I could listen to any music while writing. I usually work best in silence (thanks ADD! #squirrel), but I’ve finally gotten to the point where certain mood playlists I’ve created won’t distract me too badly.

But even though I don’t create playlists that inspire specific characters and their stories, a lot of times I’ll hear songs after I’ve written a book that reminds me of a particular scene and it takes me back to all the feels. So here’s a list of 5 songs that I’ve heard that give me the major Seducing Cinderella feels!

Whatever It Takes by Imagine Dragons

This song is a twofer for Reid. This song perfectly describes how he feels at the beginning of the book when he’s willing to do whatever it takes to get healthy in time for his UFC title fight, and then again at the end when he’ll do anything to win Lucie back. (Spoiler Alert: he does)

Just the Way You Are by Bruno Mars

Lucie lacks self-confidence in the beginning of the book, and Reid makes it his mission to show her just how amazing she is. He loves everything about her, from her embarrassing snort-laughs to her awkward disorganization and everything in between. So while she’s trying to be someone she’s not for the (douchey) guy she has a crush on, Reid loves her just the way she is. *swoony sigh*

Between the Raindrops by Lifehouse featuring Natasha Bedingfield

This is one of my favorite songs and the scene that I’ve always pictured this with is also one of my all-time favorite scenes I’ve written: angry sex up against a brick wall in an alley during a thunderstorm. Nuff said.

Wow. This song is powerful. And it’s perfect for when Lucie and Reid make love for the first time. Not the crazy-hot, friends-with-benefits sex they’ve been having the whole book, but the soul-melding, walls crumbling, “I see you” kind of sex.

You Are the Reason by Calum Scott

Last but not least, this is a great song for the epic grand gesture scene where Reid outbids his rival with a ridiculous amount of money for one date with the woman he loves. She’s his reason for everything and he’s determined to prove it to her.


So there you have it! Five songs that remind me of Reid and Lucie in Seducing Cinderella. If you’ve read the book, what songs give you the Reid and Lucie feels? If you haven’t read the book yet, I hope you’ll grab it now while it’s on sale for only 99-cents! Then join me in my Facebook reader group, the Maxwell Mob, and let me know what song you think perfectly embodies this fan-favorite couple. Thanks for hanging with me today, and I hope to see you soon on the interwebz!

Pick up Seducing Cinderella by Gina L. Maxwell for 99¢! 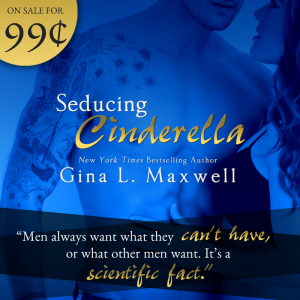 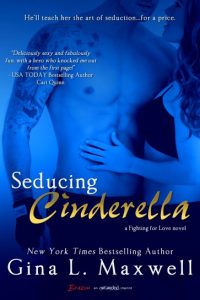 He’ll teach her the art of seduction…for a price. 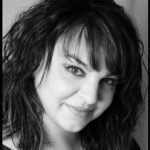 Gina L. Maxwell is a full-time writer, wife, and mother living in the upper Midwest, despite her scathing hatred of snow and cold weather. An avid romance novel addict, she began writing as an alternate way of enjoying the romance stories she loves to read. Her debut novel, Seducing Cinderella, hit both the USA Today and New York Times bestseller lists in less than four weeks, and she’s been living her newfound dream ever since. When she’s not reading or writing steamy romance novels, she spends her time losing at Scrabble (and every other game) to her high school sweetheart, doing her best to hang out with their teenagers before they fly the coop, and dreaming about her move to sunny Florida once they do. You can find her on Instagram at www.instagram.com/ginalmaxwell and sign-up for her newsletter at: www.ginalmaxwell.com/newsletter

At the RT Convention in Chicago last month, two heavy hitters in the YA world sat down to chat books…