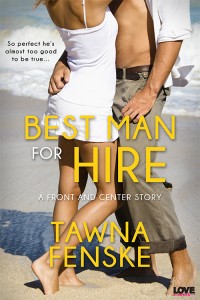 If you’re not my mother but you’re squeamish about oversharing of a naughty nature, you should probably stop reading, too.

Who’s left?
Ah, my fellow perverts. Welcome. Grab a cocktail, lie back on the chaise lounge, and let me share the secret story behind one of the most chattered about scenes in my new romantic comedy, Best Man for Hire.

The book is the third in my Front and Center series with Entangled’s Lovestruck line, and it’s the story of Anna (a woman who makes a living planning offbeat weddings but never wants to have one of her own) and Grant (career Marine whose Boy Scout façade is covering up a pretty big secret).

If you’ve read any of my other books, you know I like a healthy mix of hilarity and smexy stuff. Sometimes I fit both into one scene, which is a bit like getting to have your cake and eat it, too.

One such scene takes place in Hanalei Bay on the Hawaiian island of Kauai. It’s a favorite spot for my husband and me, for reasons that may or may not have anything to do with the story I’m about to share.

Several years ago, we were visiting my parents on Kauai where they live half the year. While the beach around Hanalei Bay is often a bustling place, it was oddly quiet on this particular day. My parents went for a walk, so hubby and I swam out in the warm water to a spot a few hundred yards from shore where the water was chest deep.

Blame it on the tropical sun, or the romantic lilt of ukelele music on the breeze, or the fact that it was a Tuesday. Whatever the reason, we found ourselves feeling frisky. Glancing around, we discovered there was no one around us with a view of anything that might transpire beneath the water’s surface.

I’ll leave it to you to imagine what underwater activity we selected. If it’s easier to imagine us playing pinochle, let’s just go with that.

Fast forward a few minutes, and we concluded our pinochle game and swam back to shore feeling giddy and a little naughty. My parents were just returning from their walk, and my mother pulled out her camera as we approached.

“I just got the nicest photos of you two kissing out there,” she said, flipping through the images while my husband and I gaped in horror. “This camera has a really nice zoom.”

Indeed, it did. And while (thankfully) the photos gave no indication of what was happening under water, it was all I could do to refrain from telling my mom she’d captured something more than mere kissing.

And now it’s yours. A little something to giggle about when you read the ocean sex scene in Best Man for Hire.

Find out more about Best Man for Hire
Only $0.99 for a limited time!

Under the Misletoe with Shae Ross

Behind the Book with Melia Alexander: How My Debut Book Kept Me Out of Jail

Heart, humor, and happily ever after… We’re having a summer reading celebration with Rob…