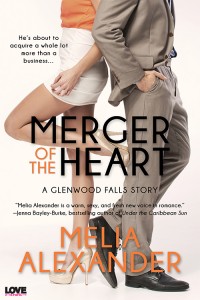 Suffice it to say that no murder was committed in the making of my debut book, Merger of the Heart! However, the uncomfortable truth was in how the hero, Daniel, came into creation.

See, in my day job as a safety coordinator, I work with dudes at what I fondly refer to as The Male Observation Lab – a construction company full of brawny, brainy, and painfully blunt men. The blunt part was what really pushed me one day.

I was preparing to leave one job site for another when one of them oh-so-casually informed me of what I could do with a bit of safety advice I offered. (Well, okay, so I told him he HAD to do it, but I swear I was polite!) I was pretty young in my career and hadn’t yet learned the fine art of being blunt in return, so I didn’t take it well. (Trust me when I say that’s changed!) The next site was an eight hour drive away. Not having anything better to do, I plotted ways to kill him. (Did I mention I was pretty young?) My thoughts ranged from feeding him stuff I knew he was allergic to, to the kinds of “accidents” that might happen. (Please refer to the “young” comment above!)

Then something weird happened. Maybe it was too much fresh air from the countryside I was driving through. Or maybe it was that my poor brain had run out of ideas. Whatever it was shifted something inside me, ’cause then I grudgingly thought about all the people who might actually care about him, and who would miss him if he was gone. After all, I reasoned, he had a long-term marriage and wonderful kids. He worked hard, was a great contributor to the company and was well thought of in our industry and our community. The dude had to have some shred of goodness in him, right?

I wasn’t a romance writer at the time, but I’m guessing my muse was just itching for a chance to get noticed. See, I started to think about what would turn someone into…well, him. What I came up with became the back story for the ruthlessly successful businessman, Daniel Spencer.

All in all I figure I got the better end of the argument that day – I stayed out of jail and started down the writing path. Only, the dude doesn’t know he inspired the hero, and no way will I ever admit to it. So keep this to yourselves, ‘kay?

Find out more about Merger of the Heart
Only $0.99 for a limited time!

Behind the book with Tawna Fenske: What you don't know about that frisky ocean scene in Best Man for Hire

One Month of Elle Kennedy

Oftentimes, characters develop fully while I’m plotting or writing. They start out rather nebulous (…