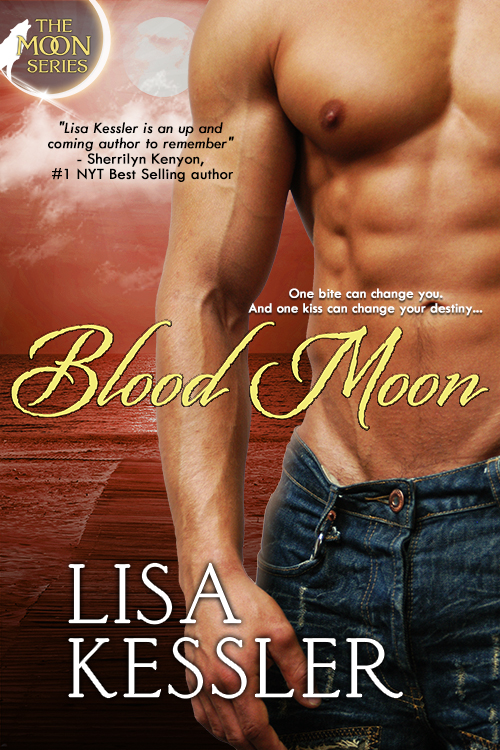 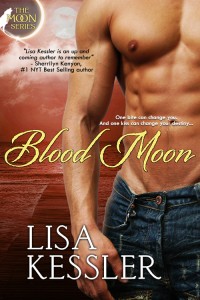 One bite can change you.

And one kiss can change your destiny…

It’s that time of year for kisses under the mistletoe! A single kiss, magical kiss to awaken possibilities between two people.

Sometimes that first kiss and make or break a future relationship, right?

And if you’re a werewolf, it could seal your fate.

In my new release, BLOOD MOON, Gareth and Nadya’s first kiss was also the first time they touched skin to skin. In my Moon Series world, a werewolf doesn’t recognize their mate until the moment their flesh touches. So when Gareth and Nadya finally kiss, Gareth’s destiny is revealed to him.

And it should be happy… But Nadya is dying and Gareth has already lost everyone he ever loved. Can he love one more?

(This is in Nadya’s point of view, and she’s a new werewolf, so she has no idea about mates.)

The second his lips brushed mine, my pulse raced, and somewhere deep inside of me the wolf growled. I wasn’t sure how I understood her, but she made her intent crystal clear.

A tidal wave of passion, shock, and possession swamped my senses as I ran my hands up his chest and around his neck. He held me tight, but it still wasn’t close enough. I parted my lips, my tongue twining urgently with his. Any fear I’d had earlier about my body not responding evaporated. Every part of me wanted him. Now.

My fingers tightened in the back of his hair and he moaned into the kiss. My pulse skyrocketed, heat smoldering low in my belly. We had on way too many clothes. This was the passion I yearned for. If my time on earth came to a close soon, I wanted to wallow in desire, to feel as alive as possible.

Gareth made me feel invincible.

He pressed me against the wall, parting my legs with his knee, bringing our bodies even closer together. His erection rubbed me, rock hard through his jeans. I slid my hand down his chest and around his waist, then lower, encouraging his hips forward, closer.

Suddenly he broke the kiss, resting his forehead on mine while we gasped for air. His pupils dilated and narrowed, his nostrils flared, and I started to smile. “Wow… That was amazing.”

Gareth shook his head like he was just waking up, and then he backed away. His emotions were gone, boxed up so far from me that my empathic abilities were no help.

“This can’t be happening.”

“Excuse me?” I straightened, hoping my rubbery legs would hold me up.

He raked his fingers through his black hair, pulling it back from his face. “I can’t do this.”

“What?” Talk about a cold shower. “You lost me. What just happened?”

He finally met my eyes and although his feelings were hidden, the raw pain in his gaze was impossible to miss. “You are so damned beautiful, Nadya.” He yanked off one leather glove and caressed my cheek with his warm hand. His touch was tender, in stark contrast to the tense line of his jaw, the agony in his eyes. “Promise me something.”

I swallowed my own knotted emotions. “Okay.”

“Don’t keep secrets from Jason. He’s your best chance to beat the poison in your veins.” His hand dropped from my skin and already I yearned for his touch. “This is so fucking unfair.”

He hurled his leather glove across the room like a missile, and it collided with a picture on top of the television. The frame toppled over. I flinched as the glass shattered, but the noise didn’t even phase him. Gareth paced the room, snatching his glove up off the floor without righting the picture. Every few seconds I’d get a glimpse of emotions I didn’t understand. Rage, passion, worry, yearning, and fear. Lots of fear.

“Gareth, talk to me. You’re not making any sense.”

He rubbed his hands down his face and turned toward the window. “I thought I had a chance to start over with a clean slate.”

He glanced over his shoulder with a sad smirk. “I wish.”

He took a deep breath and slowly turned around. I stared into his eyes, wishing he’d open his heart to me. His passion had been there. He’d wanted me as much as I’d wanted him. Did he worry he’d hurt me? My gift was no help to me at the moment. Being clueless sucked.

Gareth came closer and brushed a chaste kiss to my forehead. “I’ve lost everyone, sweetheart. I can’t stay here and lose you, too. I wish I was strong enough, but losing Gabe broke me. I can’t do this again. I won’t.” He went to the door and stopped. His voice lowered, gravelly with emotions he refused to share. “You should have a mate who can stare into the abyss and tell it to fuck off. Stay with Jason and stay alive. You don’t deserve this. Any of it. And you definitely deserve better than me.”

He closed the door behind him and I sank onto the couch, trying to figure out why my heart tore in half. Tears spilled down my cheeks, and my mind reeled. I’d only known Gareth for a couple of months. Tonight was the most we’d ever spoken, and the first time we’d ever touched.

So why did it feel like my whole world just collapsed?

I hope you’ll check out Blood Moon! And whatever you’re celebrating this time of you, I wish you happiness and JOY!

Find out more about Blood Moon
Only $0.99 for a limited time!

Are you ready for another sneak peak at Entangled Publishing’s brand new, sexy novella line, F…