My favorite thing about the holiday season is how excited my six kiddos are to see the tree go up and get their ornaments hung. It’s a mad dash to see how many they can hang, which usually means they’re all at the 3 foot eye level, but it’s beautiful all the same!

Snow. We live in the snowiest region of Upstate NY, and well… shoveling and snowblowing stinks. That being said, I love getting snowed in with my husband! 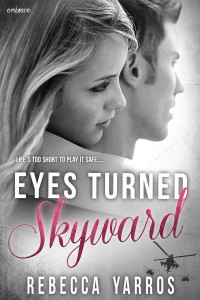 Jagger would give Paisley a necklace with a little jeweled bird as a pendant. Why? Because his nickname for her is “Little Bird,” since she went flying off the pier when they first met.

Paisley would give Jagger a jar of nickels. They’re a symbol of forgiveness between them, and she would want him to know that she’s not going anywhere. She’d also make sure that his stocking has his name embroidered to match her family’s since he hasn’t had a holiday with any sort of family in six years. She’d want him to know he’s a part of hers now.

Jagger would definitely hang it in the cockpit of the helicopter, and sneak Paisley into the hangar. The cockpit is the only place he feels like he’s home until he’s with her, so he’d have the best of both worlds.

He spun me around, and as I gasped, his lips landed on mine.
He took the opening, sliding into my mouth as his hands did the same with my hair. He held me to him, stroking the roof of my mouth, pulling away just to dive back in.
My shock lasted a heartbeat. Maybe two. Then I rubbedmy tongue against his and pressed closer. His groan vibrated through his chest, and I was swept up in everything…Jagger. He pressed me into the table, bringing our bodies flush. He was massive, surrounding me as he drove me breathless with soft lips and hard kisses that tasted like peppermint. Need ripped through me like a shock wave, and I heard a moan. Oh, God. It was me. Yes, those were my hands at his back, fisted in his T-shirt, pulling him closer. That was my body arched into his, and the friction felt so good. He consumed me, owned me, and I loved it because in that second, I owned him, too.

Behind the Book with Ally Broadfield