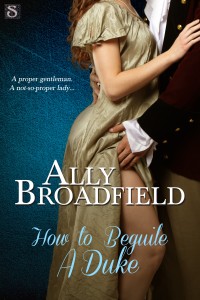 Jane Austen is my favorite writer. She is generally considered to be the creator of the romance novel. Her understanding and portrayal of relationships is quite insightful, which is remarkable considering that she never married and died at a young age.

The first historical romance I wrote was for a Jane Austen inspired short-story contest. It was a continuation of Sense and Sensibility featuring the youngest daughter, Margaret. I didn’t win the contest, but I did get some favorable comments on my story and even some mentions from bloggers who had voted for it. That story eventually became the basis for my first book, Just a Kiss, which released in April.

Jane Austen also subtly influenced my current release, How to Beguile a Duke, though I didn’t realize it while I was writing it. It was only after multiple rounds of edits that I noticed a few similarities between my heroine, Catherine, and Elizabeth Bennet. Catherine had a much less conventional upbringing than Elizabeth, and though her family is wealthy, her father is not a gentleman. Both ladies would be viewed as inferior by the social standards of the Regency period. But like Elizabeth, Catherine is intelligent, has a lively disposition that sometimes borders on impertinent, and isn’t afraid to speak her mind.

Likewise, it was during the editing stage that I noticed the similarities between hero of the book, Nick, who is the Duke of Boulstridge, and Mr. Darcy. They’re both a bit aloof, hold enviable positions in society, are wealthy, and sometimes come across to others as condescending.

And of course, the arguments… *cough, cough* I mean, conversations between Nick and Catherine are every bit as spirited as those between Elizabeth and Mr. Darcy. There may even be a botched attempt at a proposal, but I don’t want to ruin the story for you since I hope you’ll read How to Beguile a Duke so you can see for yourself. Please let me know if you notice any other similarities that eluded me.

Find out more about How to Beguile a Duke
Only $0.99 for a limited time!

Under the Mistletoe with Rebecca Yarros

Under the Mistletoe with Linda Bond

As a grandmother of five, the holidays are an important part of our family traditions. Whether it’s …

Save Money and Time with Bulk Cooking   There was a point, a few years ago, when I was t…