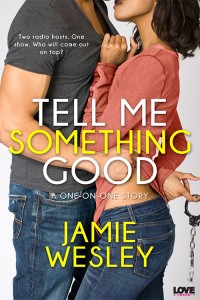 Maybe you’ve noticed that the title of my book is Tell Me Something Good. 🙂  And maybe you think that’s in reference to the Rufus & Chaka Khan song by the same title (and here’s a little earworm for ya if you haven’t heard it lately).

If you did think my book title was in reference to the song, you are 100% correct.

Here’s the deal. This novel, my first published book, wouldn’t have existed without the song. Why’s that? Because I had the title of the book before the book existed.

I had no characters, no plot. Just a title. But soon it all started coming to me in waves.

The part of the song title that stood out to me was “Tell Me.” “Tell Me” led me to “talk” and then “talk radio.”

I’m an avid listener of ESPN Radio. I started listening more than 10 years ago because I didn’t have cable TV, but the Dallas ESPN radio affiliate broadcasted my beloved Dallas Mavericks’ games. And my old job required me to be on the phone a lot, but I needed background noise because I hate total quiet. ESPN was a better alternative than a music station because the volume was steady (no need to worry about going from a ballad to a loud rock anthem or rap song while talking to a client).

I also grew up listening to morning radio shows like Tom Joyner’s thanks to my mom, who preferred those to TV shows like Good Morning America.

So, now as a storyline, talk radio was firmly imbedded in my brain. I’d also been toying with the idea of doing an enemies-to-lovers story for my next project because I hadn’t tackled that trope yet.

And then it hit me. What if two radio show talk hosts who couldn’t stand each other were forced to do a show together?

As Oprah would say, it was an aha! moment. Just like that, Noelle and Tate were born.

I loved the story I came up with and I got some validation that maybe others did too when I received a call on March 26, 2012 from Romance Writers of America board member Terry McLaughlin telling me that Tell Me had finaled in RWA’s Golden Heart® contest, the premier contest for unpublished romance writers.

I was shocked, but thrilled. It was a neon-flashing sign that maybe I wasn’t wasting my time with this writing gig, so I queried agents and two publishers (one mostly because they promised feedback in a short amount of time). All said no. I was disappointed, but not defeated. I knew Tell Me was good, but it needed some work. So I set it aside for a bit and worked on improving my craft with other manuscripts. I also gave Tell Me to a friend, who gave it a wonderfully thorough critique. Taking her advice and the feedback I received in my rejections to heart, I made it the best story I could.

After working up the courage, I submitted the reworked story to Entangled, a publisher that had long been on my radar, on a Monday. I had an acceptance email from the lovely Gwen Hayes that Saturday.

I was beyond overjoyed. I was going to be a published author! And it was all because I love music and listening to the radio.

So thank you, thank you Chaka Khan and Rufus!

I’m sure Tate and Noelle (or is it Noelle and Tate?) would agree.

Connect with Jamie at

A peak at Robin Covington's Office

What Makes Space Opera So Awesome? I’ve been a fan of space opera my whole life. I started watching …

Does anyone remember the episode of “Friends” with the “Freebie list“? Thi…