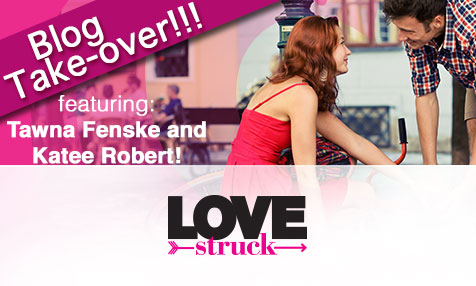 Katee Robert & Tawna Fenske are wrapping up their Blog Takeover Week with a final interview with each other.  They’re dishing About everything Lovestruck, a New Entangled Publishing Imprint. We hope you’ve enjoyed the week with these two hilarious ladies! 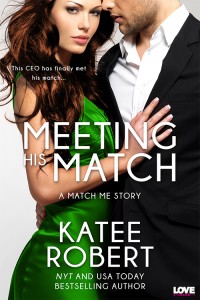 KATEE: Hi Tawna! Let me start off by saying I totally fangirl squeed when I found out we were launching Lovestruck together. I’ve been in love with your stuff since Making Waves made me laugh so hard I cried, and Marine for Hire only solidified my fangirl status. So what can we expect from Fiancée for Hire?

TAWNA: Awww, thanks so much for squeeing. That’s not messy to clean up, is it?

When our editor first told me about Lovestruck, I liked the sound of stories with a lot of emphasis on “meet-cutes,” smart dialogue, and powerful love connections, but the second she told me you were one of the launch authors, I was hooked. I even had my agent try to negotiate it into my contract that I’d get to launch with you!

I’ve always loved crafting sexy romantic comedies, and Fiancée for Hire was one of my favorites to write. Fans of Marine for Hire began emailing me right away asking when I’d tell Mac and Kelli’s story, so I was thrilled to have the chance to write it. But readers who’ve never heard of me or my books can still jump right in with this tale of a feisty, ball-busting veterinarian who agrees to play the role of a sweet, demure fake fiancée to a stoic ex-Marine turned covert government operative. The book has oodles of action, humorous dialogue, steamy sexytimes, and of course, the pleasure of watching this stoic alpha-male meet his match.

Now I get to ask you a question, right? Wait, that wasn’t it.

I’ve always been in awe of your knack for writing characters with such fabulous chemistry. Your interplay between Bri and Ryan in In Bed With Mr. Wrong is absolutely delicious. What can you tell me about Addison and Caine in Meeting His Match? 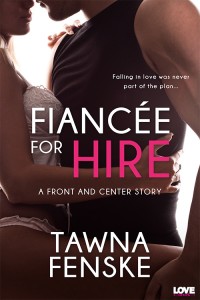 KATEE: Aww, thank you! Bri and Ryan were a complete blast to write! I love the interplay between two characters who have blatantly opposing goals, and that’s something that you see a TON of with Addison and Caine.

Addison is a NYC matchmaker who believes that each person gets only one soul mate and that she’s already had and lost hers. Helping people find their happily ever afters is what fulfills her. And the fact Caine has no want or need of a soul mate… Yeah, she finds it almost personally offensive. Addison and Caine are very much the Unstoppable Force and the Immovable Object, and throwing them together was the so much fun to write.

So, I have to admit, I’ve been intrigued by Mac since we first saw him in Marine for Hire. The thought of having him paired with the irresistible Kelli is something that makes me downright giddy. Which means I have to ask–since everyone will want to know–exactly HOW hot do things get between them?
TAWNA: Oooh, I can’t wait to read Caine and Addison’s story. That sounds like one I’ll want to read straight through in one sitting, so I’m going to need you to write a note to our editor letting her know why I’m missing my next deadline.

Things definitely get pretty steamy between Mac and Kelli. Mac learns pretty fast Kelli isn’t the sweet, demure fake fiancée his sister said she’d be, and Kelli wastes no time showing control-freak Mac that he doesn’t need to be in charge all the time. Of course, Kelli also learns how sexy it can be to have someone else calling the shots sexually. The result is a lot of back-and-forth wrestling for power. Naked wrestling. Sweaty, naked wrestling with some public indecency and maybe handcuffs. Is it hot in here?

I’m a junkie for research (evidenced by the thrill I got from learning about prolapsed lizard penises and methods for de-fuzzing cat nards for the veterinary scenes in Fiancée for Hire) so I’m super intrigued by the idea of your matchmaker. What sort of research did you do to learn about professional matchmaking, and do you have any personal experience with things like blind dates or online dating that helped you craft this story?
KATEE: You had me at sweaty, naked wrestling! I’m a hardcore research junkie, too. My nonfiction library keeps growing exponentially with each new book. Matchmaking is something I’ve been fascinated with for years now. I spent…entirely too much time watching Millionaire Matchmaker. Having a matchmaker is a very different experience than using an online matching service (which I have WAY too much past experience with it–oh, the stories I could tell). With a site like Match.com, the algorithm can point you in the direction of the “right” matches, but the control is totally in the hands of the person who’s cruising the catalogue, so to speak. You can go with the people it suggests, or you can go off searching on your own.

A matchmaker, though? That’s a real, live person who is there to push and guide you into a very personalized process. As Addison points out pretty early in Meeting His Match, sometimes what people want isn’t really what they need in order to be happy. It’s part of her job to see beyond the surface and give them that. And, with someone like Caine, she’s got to persuade him that he wants to be matched to begin with!

KATEE: One of the things I’m so excited about with the new Lovestruck imprint is the focus on the meet-cute. It’s a term I’ve been throwing around ever since I saw The Holiday (which everyone seemed to dislike, but I totally adored), because it’s one of my favorite parts of romantic movies. To be able–and encouraged–to bring that into play with these books was like putting me in the middle of a book store and saying, “Go for it!” In Meeting His Match, that moment is when Addison walks into Caine’s office and declares herself his matchmaker. How did you handle the meet-cute in Fiancée for Hire and can you give us any hints as to what future meet-cutes might entail?
TAWNA: Wow, that sounds like some really fun research! I’m so eager to read the book!

I’m generally known as a romantic comedy author, so meet-cutes have been my bread and butter for a long time. In Fiancée for Hire, Mac and Kelli have been acquainted since they were kids, but Mac only dimly noticed Kelli as the pigtailed pal of his baby sister. He’s traveled so much as an adult – first as a Marine, later doing top-secret work for the government – that he’s really never gotten to know Kelli as a grownup.

Kelli, on the other hand, has had the hots for Mac for eons, so she’s thrilled to travel to Mexico to play his fiancée and run a spay/neuter clinic. She’s fantasized for years about jumping his bones, but the possibility of falling in love has never crossed her mind. When Kelli first shows up to talk with Mac about filling in as his fake fiancée, Mac stammers that it’s nice to meet her.

“Meet?” She raised an eyebrow at him as she tucked her
small hand in his and gave a ladylike shake. “We’ve met at
least a hundred times, Mac. You put a Band-Aid on my knee
when I was ten and you were this big, cool high schooler
whose kid sister’s friend tripped while chasing boys on the
playground.”

“Of course,” he said, his brain offering up no recollection
of the Band-Aid but doing an impressive job resisting
the urge to let his eyes stray to her cleavage. “But we’ve
never interacted under professional circumstances related
to the negotiation of a covert business deal pertaining to
international security.”

That sort of interplay continues through the first few scenes, with Mac being unnecessarily formal and professional, and Kelli disarming him with her flippant replies and sex-infused banter. As you might imagine, it doesn’t take long for Mac to loosen up a bit and for Kelli to realize she’s playing with fire.

So a lot of the buzz about the new Lovestruck line is how many of the books will be same vein as classic romantic comedy films. Movies starring Rachel McAdams, Reese Witherspoon, and Kate Hudson are exactly the sort of thing we’ll see on the pages of Lovestruck stories. Are there any particular actors or actresses you could envision playing Caine and Addison?

KATEE: It’s really funny, because most of my books up to this point have had some sort of connection or inspiration to various Reese Witherspoon movies, and now we get a whole imprint full of them! I’m so excited to read all the books.

As to inspiration for these characters–yep! Caine was actually the more difficult of the two to cast. As soon as Addison made an appearance in Seducing the Bridesmaid, I pictured her as Isla Fisher. She’s always struck me as this wonderful blend of spunky and sweet. Plus, we all know the rumors about redheads’ tempers. She was my Addison from the start.

With Caine, I was looking for the brother of a Beto Malfacini look-alike (Don’t know who he is? Go Google him. I’ll wait.). I actually put out a call with my street team for help because I was coming up with nothing. One of those amazing readers brought Rafael Lazzini to my attention. There’s this one picture where he’s got a close-cropped beard and is staring/glaring at the camera and I was just like I VOLUNTEER AS TRIBUTE. Ahem. But, yes, he’s my Caine.

So what’s next for you? Will there be more in the A Front and Center series (please say yes!!!)?

Right, what’s next. There are two more books scheduled in the Front and Center series. Grant and Anna’s story, Best Man for Hire, (which I’m writing now) is slated for publication in December 2014 or January 2015. Then in May 2015, we’ll have the final book in the series with Schwartz (the black sheep brother of the Patton family) and Anna’s sister (a character you’ll meet in Best Man for Hire).

How about you? What’s coming up on your docket? And by that I mean can you please start cranking out books at a rate of two per week so I never run out of Katee Robert titles to enjoy?
KATEE: Yay! I’ll be watching for both!

I wish I could write that fast! It would make the fact I apparently must find Happily Ever Afters for each and every side character less of an “OMG NOT AGAIN!” thing. At this point, I know that I’ll be finishing the Out of Uniform series on the Lovestruck line, with the next release being Drew and Avery’s book, Falling for His Best Friend, sometime in early 2015, followed by Avery’s sister, Alexis and one of my favorite heroes to date, Jacks, in His Lover to Protect.

There’s also something in the works on the Brazen line for this fall. So, all the things!

We hope everyone had a great time getting to know more about Lovestruck and Katee Robert’s and Tawna Fenske’s new releases.

Jodi Linton, live and on TV in Wichita Falls, Texas!

Entangled is always looking for a few good manuscripts! Could you have what we’re looking for? Read …