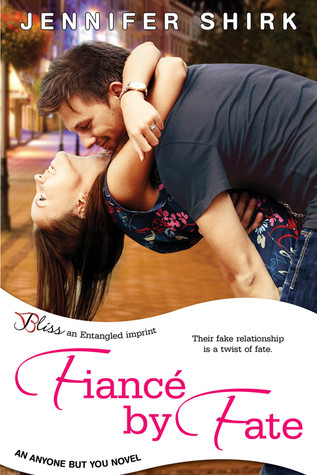 One of the cool “behind the book” things about my new Bliss release, FIANCE BY FATE, is that it actually was the second romance book I ever had written.

Back when I originally wrote it—nine years ago—I called it Unlucky in Love.  A fitting title since I was very unlucky is trying to get it published since it was rejected many times over!

However, instead of the standard rejections I had gotten with my first manuscript, this manuscript was actually getting nice editor feedback along with the rejections. I felt I was close to cracking the publishing code, but not quite there. So I eventually put the manuscript away and wrote something new.

But I always wanted to go back and try to fix Unlucky in Love. I loved the premise about a down on her luck woman trying to get win her fiancé back by making him jealous with her boss’ handsome son. Cute, right? But I never could quite figure out what I was doing wrong.

Then I took a “Can This Manuscript Be Saved?” online course by fellow Bliss author Susan Meier and decided YES, this manuscript could be saved. And in 2013, I finally decided to pull it out again and see what could be done.

I took the advice from class and probably rewrote about 40% of it and changed some of the original backstory on my characters as well as their motivations. My hero, Jack, changed the most. I made him less “alpha” while still keeping the sexiness—and of course, his sense of humor—that  I loved about him.

When I finished rewriting it, I decided to tell my editor about it and see if it fit the Bliss line. I’m happy to say that she loved it (and Jack) and this book of my heart is finally published today. Yay!

I hope this encourages some writers out there who have rejected books hidden away in their computers or drawers. I really believe any manuscript can be saved, but you have to be ready to look at it with fresh eyes and not be afraid to rewrite a good chunk of it, if need be.

I hope you get to check out Jack and my book FIANCE BY FATE for yourself and have as much fun reading it as I did writing it. J

Blissful readings to all!

Excerpt: Without breaking their kiss, Troy grabbed her hand and brought it down between their sweat-…