As much as I sometimes long to be one of those sophisticated writers drinking tea and immersing themselves in their work, I’m afraid my life is as far from that as possible. I have two small children, so their needs and wants always come first, especially in the morning.

After I’ve guzzled a pot of coffee and stuffed whatever food my children deem fit to eat that morning into their mouths, I put on my Mary Poppins smile and find some enchanting and educational way to entertain them for a while…hoping to carve out a little time for mommy to sit down at her desk and work.

Five minutes later, if I’m lucky, there’s usually some sort of interruption from one of my little darlings.

Yes, yes, mommy does give the best hugs. Give me some love, now go play. I then try to settle back into the groove of whatever world I’m creating.

By then at least another ten minutes has past, which means of course the kids are starving.

Okay, the kids have now been fed two healthy meals consisting of store-bought chocolate chip muffins and Cheez-Its by 10:00 am. Now, please let mommy work. But the dog is whining to go outside for the hundredth time and the cat is trying to sleep on my keyboard and the kids are not impressed with the whimsical craft I’ve created for them for the day, so fighting and yelling pours into my sacred writing space.

*Takes a deep breath* You win, my little chickens. Let’s put together a puzzle or read a book or get some really good snuggles in.

We pop in a movie and my kids become little zombies. I could sit down and write, but I’m tired and the day has taken forever and dog is still whining. I have something else in mind…even if it’s only noon.

Who knows, maybe the wine will create some really interesting new characters!

Get Bound by Danger by Danielle M. Haas today! 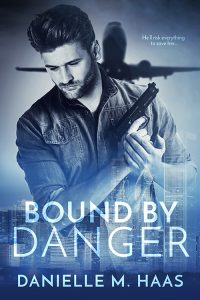 The disappearance of a local girl leads Special Agent Graham Grassi right to the doorstep of the sexy redhead that has haunted him since they were part of a thwarted hijacking last week.

Questioning Mickey O’Shay cuts through him as he informs her about her missing goddaughter, one of the girls involved in his investigation. He wants to keep her safe, but she won’t sit on the sidelines. The life of her goddaughter is in jeopardy and Mickey’s determination has him ready to handcuff her—or kiss her—in place. As time runs out though, the stakes run higher. They both struggle to ignore their attraction as they try to unravel a web of deception– before it’s too late. 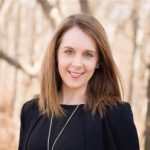 Danielle Haas resides in Ohio with her husband and two children. She earned a BA in Political Science many moons ago from Bowling Green State University, but thought staying home with her two children and writing romance novels would be more fun than pursuing a career in politics. She is a member of Romance Writers of America, as well as her local North East Ohio chapter. She spends her days chasing her kids around, loving up her dog, and trying to find a spare minute to write about her favorite thing: love.

The Last Letter by Rebecca Yarros

Happy March everyone!  Is everyone having fun yet?  You may have seen our big sis, Bliss, is hosting…

I’ve been writing professionally since 2010. The job always has its ups and downs, but the ti…

Hey everyone! We are totally stoked to announce the hosts and schedule for Heather McCollum’s …