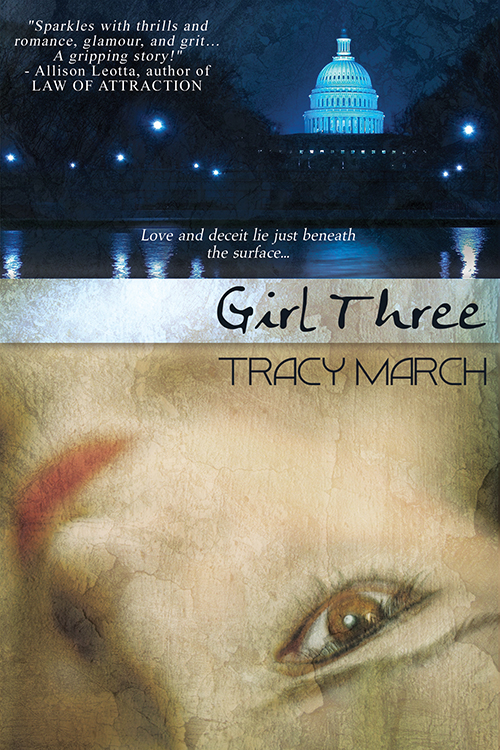 It’s your last chance to snatch up an Amazon Kindle copy of Girl Three from the fabulous Tracy March for only $2.99. This is the first time this book has ever been on sale, and you don’t want to miss it before it ends tonight!

Dr. Jessica Croft has avoided the players, the power, and the passions of Washington, DC. But when her estranged sister’s suspicious death is classified as natural, Jessie resolves to expose the murderer. As she pursues elite suspects who’d kill to keep their secrets buried, she encounters sexy security consultant Michael Gillette, who knows more about her sister than he’ll admit.

Michael has a vested interest in Jessie’s plight. Her sister died on his watch–while he wasn’t watching. His plan to find her murderer becomes complicated when Jessie’s father hires him to protect Jessie, and his interest turns from professional…to romantic.

Jessie and Michael must unravel a mystery rife with political agendas, deceit, and betrayal. When confidential papers reveal a fertility scandal surrounding the enigmatic Girl Three, the two realize the danger of exposing the truth. Who is Girl Three? And will the murderer kill again to keep a secret?

Behind the Book with Jennifer Shirk and Fiancé by Fate

Excitement, Love and Magic – they’re all there in Heather McCollum’s steamy 16th c…

Be sure to check our Entangled Suspense Facebook page every day next week for a special event! Elle …

Mission Impossible The mission: To become a writer. Chances of success? Nearly impossible. I …