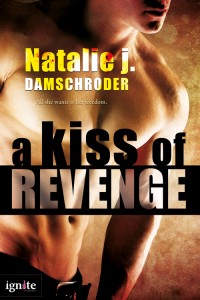 One night, when my oldest daughter was about eight, we were putting her to bed and she said something like, “I’m all about the cookies.”

A line popped into my head immediately. “Reese Templeton was all about the muffins.” Don’t ask me why it changed from cookies to muffins. It just did.

I ran out of the room to write down the line. Obviously, Reese owned a bakery, but since I’d just started writing romantic adventure, this wasn’t going to be a sweet contemporary romance. Right away, the rest of the paragraph flowed from my pencil onto whatever scrap of paper I’d laid my hands on:

Well, actually, she was more about justice and retribution. And maybe guilt. And money. But to the good people of Crestview, Massachusetts, she was all about the muffins.

As a writer, I’m not a plotter. I write for the same reason I read: to discover the story. So that’s what I did. In this opening scene, for someone who’s all about justice and retribution, who’s the worst possible person to be standing at her bakery counter right then? Obvious answer: the chief of police! Things developed from there, with questions being asked and answered in an adventurous ride that was as much fun by the end as it was when I dashed out of my daughter’s bedroom in a rush of Shiny New Idea excitement.

A Kiss of Revenge went through many, many rewrites before it became the book it is today. Originally, it was meant for Silhouette Bombshell, an action-adventure line where the romances were usually anything but traditional. The book was called Black Widow because it turned out Reese had been married six times, and most of those guys had died. She’d almost died, too, and the “accident” had given her the curse (or gift) of attracting and conducting electricity.

I wanted Reese’s journey to be one of self-discovery. Always before, she’d changed herself to match her husbands, taking on their interests and fulfilling their needs. It gave her myriad skills to call on during her vengeance quest, but floundering when it came to knowing who she was as an individual. Because I am all about the romance, I embraced Bombshell’s open structure and gave Reese three potential love interests. Exciting, right? Except if she picked the wrong one. So I left that ambiguous at the end, something I suspected wouldn’t fly.

Spoiler: I was right.

After Bombshell folded, I rewrote the book many times. A love interest and his subplot disappeared. The dead husbands were pared back. The romance was beefed up, and the hero became more apparent and even helped Reese fulfill her goal. After I sold the book to Entangled, my fantastic editor Nina Bruhns helped me boost the romance even more, and in doing so made the conflict more complex and mutual.

I’m very happy with the final result, but even happier that I got to keep my opening lines. That never happens! Nina had me add a prologue, so those aren’t the very first lines you’ll read when you start A Kiss of Revenge. But they are still the ones that define what Reese has come to be…if not what she will be when it’s all over.

Check out all of Natalie’s books HERE!

1 Reply on Behind the Book with Natalie Damschroder

Entangled is turning 3!   Entangled launched in 2011 and we’re celebrating! Two years ago, we l…