First there were Angels, then Demons, and now there’s a Succubi in the mix! 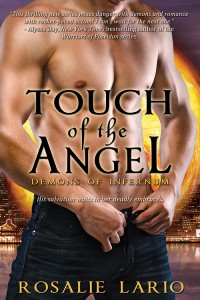 But the happily-ever-after Amara’s dreamed about will have to wait. Before she and Ronin can find salvation, they must bring down the madman hell-bent on destroying everything—and everyone—they love. And Ronin and Amara are at the top of his list.

Rosalie Lario is back with another Demons of Infernum novel! TOUCH OF THE ANGEL, book 3 in the series, rereleased yesterday! If you weren’t excited to begin with, there’s a new drool-worthy cover that turns it up a notch! So what are you waiting for? Grab a copy and start reading!

Follow the official blog tour for a chance to win one of the 3 “Demons of Infernum Prize Pack” and read excerpts, interviews, and more!

Formally a corporate and real-estate lawyer, Rosalie Lario practiced law for five years before finally admitting to herself that it wasn’t nearly as fun as dreaming up stories. As an avid reader of romances and supernatural stories, she knew she wanted to write urban fantasy and paranormal romance.  Tales of vampires, demons, and other supernatural beings ensued. When not writing, she enjoys spending time with her husband and son in her home state of Florida.

Find out more at http://www.rosalielario.com

CHAIN OF ILLUSIONS is here!

Happy Thanksgiving from the Entangled Team!

2 Replies on The Demons of Infernum are back!

I had the good fortune to be one of the early readers for Lea Nolan’s Conjure. Before I was even hal…

The blog tour for Werewolves Be Damned by Stacey Kennedy has started!  Stacey will be visiting blogs…

Gastown in Vancouver, BC – setting of The Millionaire Daddy Project   The origina…