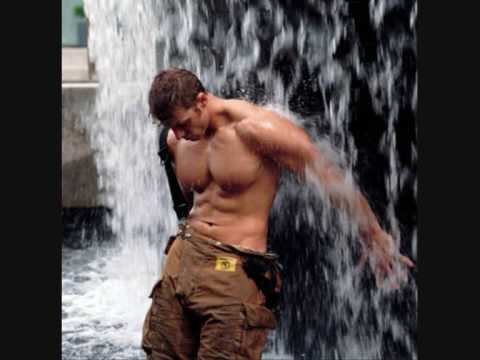 Today we are welcoming Josh Powers from the novella Loving Mindy by Karen Erickson. It can be found in the Stranded with a Hero anthology on sale now! 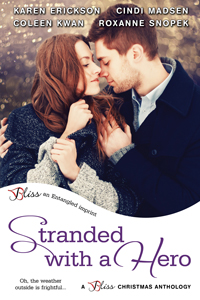 Special skills: Very thorough and inquisitive.  My job as an investigator requires me to be. I’m always looking for clues or signs.  Very good at reading people.

Biggest regret: That I gave up on my friendship with Mindy so easily when we were seniors in high school.

Darkest secret: I still care about Mindy though I pretend I don’t. She’s always been the one who got away.

Craziest thing you’ve done: My job is fairly crazy and risky so running into burning buildings, etc. is pretty crazy.

I’d also say when I laid it on the line to Mindy back when we were teens and telling her how I felt…that was crazy.

One thing you would refuse to share: Mindy….now that she’s back in my life, I’m not about to let her go.

Early bird or night owl: All hours! I blame the job. I can function on little sleep.

Just got to love a guy who is willing to lay it all out on the line when admitting his feelings!  Thanks for joining us Josh. 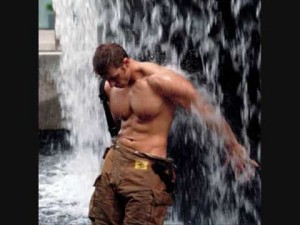 She closed her eyes when he traced the delicate line of her jaw with his index finger. “I—oh, wow, I never thought it could be like this between us.”

“Like what?” He had no idea where she was going with this but he didn’t care. He knew exactly where he was going in about thirty seconds.

Straight for her lips.

“So easy. Sexy.” She swallowed hard, and he caught the movement of her throat. “I really wish you would kiss me now, if you’re going to do it.”

“What if I want you to wait? Anticipation is half the fun,” he teased, feeling like a jackass yet he was also enjoying himself. Hopefully she’d understand, she’d get him.

And hopefully he’d make this kiss worth the wait.

“The anticipation is slowly starting to kill me,” she admitted. “Hmm, well we wouldn’t want that to happen because that means you’d miss out. And we can’t have that.” He cupped her cheek, stroked her baby-soft skin with the tips of his fingers as he drew her in. Close. Closer, their lips perfectly aligned, their heads to the side, their body language speaking to each other big-time and liking what the other had to say.

“Josh.” His name was an achy little whisper, her voice sending an arrow of lust straight through him to settle between his thighs. Damn, the woman was good. Too good. And they hadn’t really even done anything yet.

“Yeah?” He kissed her cheek, the petal-soft skin, the scent of her fragrance driving him wild. If he didn’t watch it, he’d push her down on this couch, strip off her clothing, and have his wicked way with her for the rest of the night.

“P-please.” Ah, she was stuttering. Time to put her out of her misery and close the deal.

He brushed her mouth with his in a featherlight kiss. Once. Twice. Slid his hand from her cheek into her hair and pulled her close to him, his fingers curling into the silky strands, tightening his hold. She opened for him and he swept his tongue inside her mouth, sliding it against hers, the kiss deepening, heating. A soft murmur of pleasure left her and he swallowed it, devouring her, taking the kiss even deeper, hotter in a matter of seconds.

His blood rushed through his veins, settling in his groin. Just like that he wanted her. More than ever before.

And for once, he was glad of it. Wanted to prove to her this was more than a simple kiss to make up for old times. That maybe what they had here could be something real and good and full of so much promise…

He broke the kiss first before it got too out of hand and stared at her, loving how flushed and tousled she looked. Pride surged through him. He put that look on her face and her hair was a total mess because of his fingers. “Now that—”

“Was amazing,” she finished for him, offering a shaky little laugh that really wasn’t any sort of answer.

“You think?” He trailed his thumb across her cheek, her lip, exhaling harshly when she caught the edge of his thumb with her teeth, nibbling slightly before she released him.

“Then maybe we should do it one more time? To make sure we’re compatible?” And before she could reply, he was kissing her again.

And he enjoyed every single blessed minute of it.

Want to read more? Pick up your copy of Stranded with a Hero today!

Mindy can’t believe she’s stuck with her ex–best friend—and the man whose heart she broke years ago—for the holidays, though the tension between them is more than enough to keep them warm. Josh Powers never forgot Mindy, but he can’t risk his heart a second time.

Naomi’s sworn off men like Aaron—rich, cocky, and dismissive of holiday traditions. Aaron decided to spend Christmas in sunny Australia to avoid snowy New York, not to fall for the woman his best friend warned him away from. But when a volcano grounds him, Aaron and Naomi’s relationship becomes eruptive.

An Officer and a Rebel by Cindi Madsen

The last person police officer Nate Walsh expected to discover in a snowstorm is his brother’s ex and former town rebel, Kelsey Cooper. She’s his complete opposite and totally off-limits, but as they wait out the storm together, all he can think is how he wishes she’d stay forever.

Saving the Sheriff by Roxanne Snopek

Want to know who's falling for Flaunt (and the CEO)?

Ready to discover who's being daring on Flaunt?

Once upon a time, I used to throw dinner parties that involved at least four courses, …

With the holidays coming up, I am reminded of being trapped in a car on long trips to …