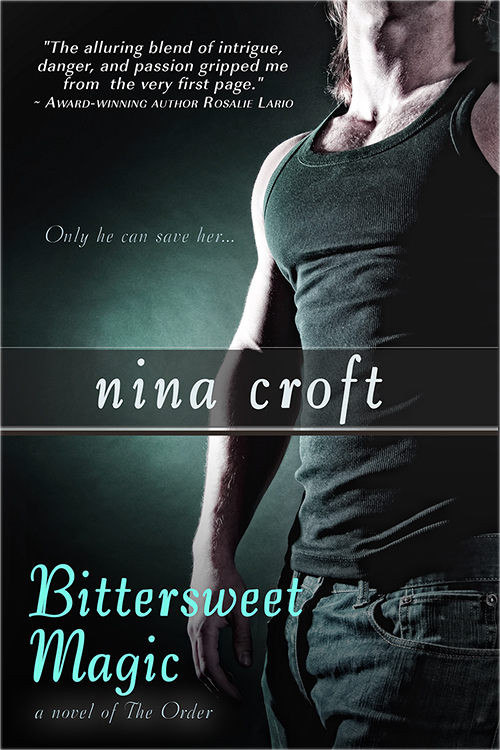 To celebrate, we’ve included an exclusive excerpt below plus a chance to win one of five copies of the first book in the series!

Also, make sure to follow Nina on her Blog Tour for more fun!

Roz has been indebted to the demon Asmodai for five hundred years, and her freedom is just around the corner. All she has to do is complete one last task for him—obtain a key that had been hidden in a church centuries ago.

Piers, the Head of the Order and an ancient vampire, is intrigued by the woman who comes to him for help. She’s beautiful and seemingly kind, but she’s hiding something. And he’ll find out who she is and what she really wants once he uses his power to get inside her head. But Piers has no idea that Roz is immune to his mind-control…or that he is simply a pawn in her dangerous mission for freedom.

And now here’s the exclusive excerpt!

Jonas said his name quietly from behind, and he glanced over his shoulder. Jonas gestured for him to come closer, and Piers moved to stand beside him. The warlock turned so his back was to Sister Rosa and spoke quietly. “You do know that she’s pretending, don’t you?”

Shock hit him in the gut. “Pretending?” That theory hadn’t occurred to him at all. “How the f*** can she be pretending?” He kept his voice low. But how could she be—it wasn’t possible. The only “person” he’d come across in more than a thousand years who could resist his compulsion was Tara. And she’d turned out to be half fae, half demon.

Jonas shrugged. “I have no idea, but she’s having you on, my friend.” He gazed past Piers for a moment. Piers followed the look. Sister Rosa was staring at them out of those big brown eyes, appearing the perfect picture of sweetness. Hell. Was she pretending? Had she been pretending the last couple of times? When she’d given up her sweet blood and come so easily in his arms?

He’d been speaking more to himself than to Jonas, but the warlock answered anyway.

“I have no clue as to the why. Now the how—that’s another matter.”

“So tell me how.” He wasn’t sure he was going to like the answer.

“I can sense a great power. It was obvious as soon as she walked in the room. But it’s off, hidden and unfocused…” He shook his head. “Almost as if she’s unaware herself.”

“Maybe she doesn’t know what she is either.”

“She knows enough to pretend to your compulsion. Which means someone must have warned her about you.”

Who? Was she part of some intricate plot? He couldn’t believe how much he hated that idea. But if she was, then how did she fit in? Who was she working with?

How far would she go to keep up the pretense?

He was about to find out.

They’d finished their little conference, and he was heading back. Roz wiped the expression from her face as he approached, his eyes staring straight in to hers.

Oh, great, the mesmerizy thingy again. She could tell by the intense expression on his face. He had stunning eyes, dark blue like a hot summer day. All the same, she wished he wouldn’t stare at her with them. It was just as well she was a good actress. She wondered who the old guy was—he looked on his last legs.

She just had to get through these questions, and afterwards, she was sure they’d let her and Maria go. Why wouldn’t they? There was one good thing about the mesmerization—at least he’d believe her. Easy.

“Sister Rosa.” He came to a halt about a foot away, a small smile playing on his lips. What had the old guy told him? She flicked a quick glance his way, and the man quirked his lips as if amused. Damn. What was going on now?

“Yes,” she murmured in her serenest voice.

Okay, she was going to presume she hadn’t heard that right. Self-delusion at its best, but all the same… “What?”

“Take off your clothes.” He enunciated each word slowly so she couldn’t even pretend not to understand.

What was going on? Did he really want her to strip for some pervy purpose or was he testing her?

Ready for a sneak peak at who's getting Conned on Flaunt?

So, a small confession. There is one tireless little cell that constitutes my brain. I…

Everything to Make Him Yours at Midnight Happy New Year! To celebrate the start of the New Year, Tar…

In Gone with the Wolf, carefree Emelia Hudson owns a bar, the Knight Owl. The business is her pride …