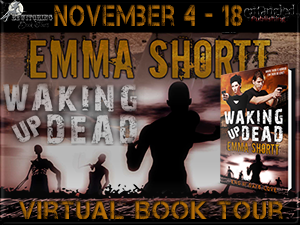 Zombies have appeared in fictional genres from horror to post-apocalyptic to mysteries, but they’re rarely seen in romance. So we’re particularly thrilled to bring this thrilling new novel to readers. If you’re a fan of  Amanda Hocking’s HOLLOWLAND, Isaac Marion’s WARM BODIES, or AMC’s The Walking Dead then we bet you’ll tear through this novel, rooting for Jackson and Luke’s love to survive despite the odds being stacked against them. In a time when zombies rule and humans are almost extinct, Jackson Hart and Luke Granger have no choice but to undertake a desperate journey for survival. In a road-trip romance for the ages they discover that even as you fight for survival there’s always time for sex…and even love.

Fans in the U.K. can meet up with Emma during the official release tour:

The blog tour for WAKING UP DEAD will also be kicking off on November 4th. There will be interviews, guest posts, reviews, and prizes! Don’t miss out on this fantastic opportunity to meet the author, learn about this new novel, and get some goods! 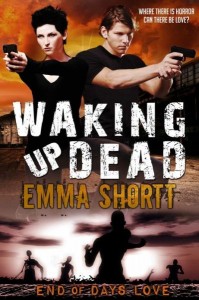 An End of Days Love novel by Emma Shortt

You know your life has hit rock bottom when you’re living off cooked rats and showering once every few months—if you’re lucky. But for Jackson Hart things are about to get a whole lot worse. When her best friend, Tye, disappears hunting for food, kick-ass Jackson’s ‘head south to safety’ plan looks like it’s dead before it’s even begun. But then she meets ex-mechanic Luke Granger, who takes her to his bunker, feeds her with non-rat based food, and offers her protection against the zombie hordes—not that she needs it. She knows how to use a machete and isn’t afraid to.

Jackson was tempted to stay in the city with her rescuer. Food, shampoo and the possibility of finally getting laid, what more could she ask for? But the flesh eaters are getting smarter and the bunker is compromised, so Jackson and Luke have no choice but to make the journey south.

Luke and Jackson team up to find other humans in a road-trip romance for the ages. They travel for thousands of miles with zombies shadowing their every move. They must utilize every resource at their disposal…and then some. On the way, they discover that even if flesh eating zombies are knocking down their door, there’s always time for sex and even love. 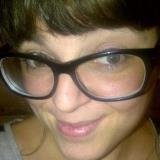 As a kid Emma wanted to be an astronaut, or maybe Captain Janeway. Because she didn’t really think her career choices through very well she ended up in an everyday geek job, crunching numbers and sighing over syntax. It seemed a long way from the stars and in an effort to escape Emma decided to get serious about her other passion. Writing.

Several years later and Emma has yet to walk on the moon or sit in the Captain’s chair, but she is still writing. She scribbles stories in all sorts of genres, contemporary, paranormal, post-apocalyptic, historical, sci-fi…if she hasn’t tried it yet she will before long. The only common theme is the romance. A hopeless romantic everything Emma writes has a love story in there somewhere.

She lives on the west coast of England with her very Greek husband and teenage kiddos. Apart from all things geek reading is her main hobby and she likes nothing better than getting home from a hard day at work and curling up with a book, though sometimes she gets home and writes one instead.

She’s full of sass, writes danger like a pro, and will wrap your heart in a story of lost love…

We’re thrilled to kick off the the month long blog tour for our Halloween reads! We have Tessa…