What happens when four friends decide to write a book together? A lot of jokes, a lot of fun and just maybe, a lot of brilliance. At least I know Barbara Wallace, Jackie Braun and Susan Meier brought a lot of brilliance to the process! When the four of us started kicking around the idea of doing an anthology together, it started as a joke. Then when our ideas began to gel, we realized we might have a pretty cool anthology.

It started something like this—one of us posted on a loop we’re all on about how much we enjoyed novellas and working with each other.

Susan said:  That was me. I love novellas. I love writing in a shorter format but I also love connecting stories!

Most of us have worked with each other in one form or another before, and it’s always been a great experience. We seem to mesh well, and are friends in real life, so that helps, too.

Barb here: I was lucky enough to work with Susan before on another anthology – Fairytale Christmas – so I knew how great she was to work with.  And Shirley, you and I go back to when we were potty training our children (whose current ages shall remain secret.)  As for Jackie – I’ve been a fan since before I published.

The dog-as-matchmaker idea started as a joke. We were tossing out well known tropes and hooks, someone said “matchmaker,” and then someone else (I think it was me) said, hey, wouldn’t it be funny if it was a dog that was a matchmaker? We’re all dog lovers, and that hit a nerve.

Literally the instant we hit on “dog as a matchmaker,” all four of us knew we had something great. One of those ideas that just sends tingles down your spine because you KNOW it is going to work.

Susan again: Though I loved the dog as matchmaker,  I also knew we needed something a little quirky about him, something that could draw readers in and that was when we knew the dog’s owner had to be a billionaire. Someone you’d never expect would let a dog run loose long enough to become the town matchmaker.  I also wanted sex in the stories…I think everybody else would have been happy either way…but, hey, if I was doing something different I was going all the way.

We formed our own little loop, tossed out ideas for heroes and heroines, but kept coming back to the dog. He became a Jack Russell Terrier, and we plugged in the name Charlie in our first draft of the proposal, and it stuck. By the time we had all dropped in our story ideas, Charlie was as real as my own two dogs.

Barb: If I remember, either Shirley or Susan likened it to doing a sisterhood of the traveling pants style story with a dog.  We started calling it the Sisterhood of the Traveling Pooch.

We had the reclusive billionaire as a connecting character throughout. At first, we were going to leave his story unfinished—let him be that mystery in the shadows. Then Barbara said she wanted to tackle his story, and end the anthology with Mr. Bonaparte’s love story, where Charlie makes his final and best match. It was the perfect ending for a great anthology.

Jackie:  Charlie also can take credit for a real-life love match of sorts. While writing my story, my family adopted a 4-year-old miniature poodle mix that I found on a rescue site.

But the best part of all? Writing about four friends, because we are, and have been, good friends for years. The writing isn’t work then—it’s fun. We could toss out ideas, commiserate with each other about deadlines and housework, and in the end, come together to celebrate and toast our collaborative project. And sitting on the sidelines, grinning at us all, is the fictional Charlie, who did the best matchmaking with us—the four authors he brought together with a wag of his tail.

Learn more about The Billionaire’s Matchmaker and order your copy of this inspired anthology today.  Charlie thanks you. 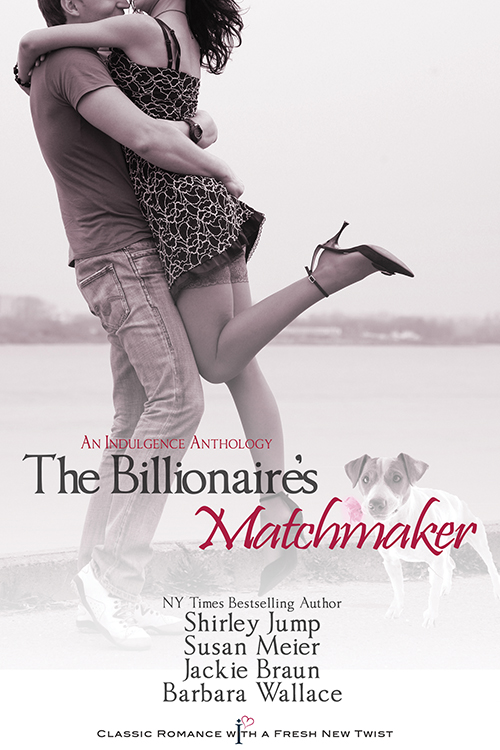 Mad About You by Joan Kilby A man she can’t refuse. A woman he can’t resist…   Special $0…

Please welcome Anna Cleary, one of the authors of When Honey Got Married, for a little bit of Straig…