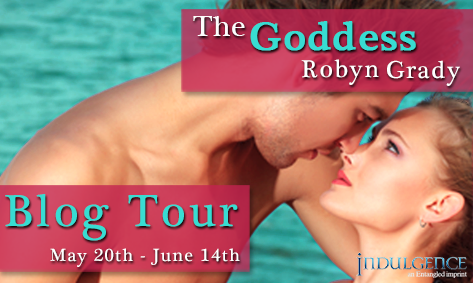 We’re very excited to share with you the blog tour details for The Goddess by Robyn Grady, which released last week!

The blog tour will be a combination of reviews, interviews, and guest posts. We’ll also be giving away several copies of The Goddess, so make sure you follow along!

About The Goddess by Robyn Grady

After college graduation, Helene Masters is excited to land a job in a picturesque Aegean kingdom. Tasked with sprucing up the Prince’s villa, she inadvertently finds herself trapped on the island with the sexiest man alive. Of course she has to fall for a man who is destined to only marry royalty.

Darius Vasily, Prince of Teirenias, can’t figure out what pretty, but accident-prone, Helene is doing at his private estate. After dousing him in paint, she disappears inside the secret cave holding the royal family treasure—a fertility statue, but a cave-in traps them both. Now Darius has to figure out how to save them before he kills her for getting them into this mess in the first place—or gives into their amazing chemistry.

Phase Two of our Covet Launch has Begun!

A Vampire Blood Bonus Fairy Tale. Part Two. “Won’t you tell me?” Pulling a jar from his stall shelve…

It’s been another awesome month for EP! Our 2012 schedule is filling up fast, an…