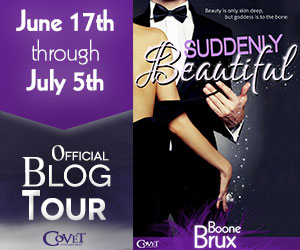 If you think love should be magical, you’ll love Suddenly Beautiful by Boone Brux! The blog tour kicks off today; follow the tour to find out what everyone has to say about it and enter the giveaway below for a chance to win an Amazon gift card worth $25!

Enter the giveaway below for a chance to win an Amazon gift card worth $25! 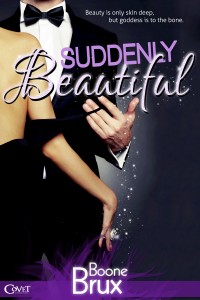 Being the son of Aphrodite isn’t a walk in the clouds. Rebelling against his demi-god status, billionaire make-up mogul Toraos Stephanos fights to separate his personal life and the immortal world by swearing off demi-god girlfriends forever. Too bad his newest employee can’t take the hint.

Though Nikki secretly pines for her smoking hot boss, no way will she jeopardize her job and independence professing her love to a guy so clearly out of her league. Too bad that leaves her with only imagining him naked and thinking evil thoughts about the new girl.

After a single bottle of Ambrosia and one night of passion… Nikki finally thinks she has a chance with the man of her dreams. But the next morning, Tor pretends like nothing happened, leaving Nikki with an emerging drive for combat—after all, turns out she is the daughter of Ares and she’s about to make her mama proud.

All is fair in love and war… and Nikki’s not about to let anyone forget it.

Are you ready for some crossword fun?   With two books out this week from Entangled Teen’…

Craving a sexy superhero to rescue you from your day-to-day life? We’ve got you covered! Holdi…

For a few decades, in the 1970s and 1980s after the adoption of most of our current battery o…