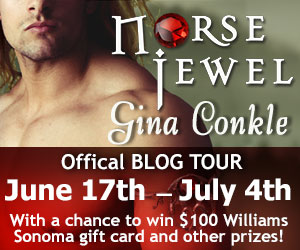 With the mega-popularity of shows like Game of Thrones and the History Channel’s Vikings, it seems like big, gorgeous, warrior heroes wielding broadswords and axes are crawling out of the woodwork! If you need a new Viking fix and can’t wait till next season, you’re in luck because Gina Conkle’s new Scandalous romance Norse Jewel releases worldwide today! 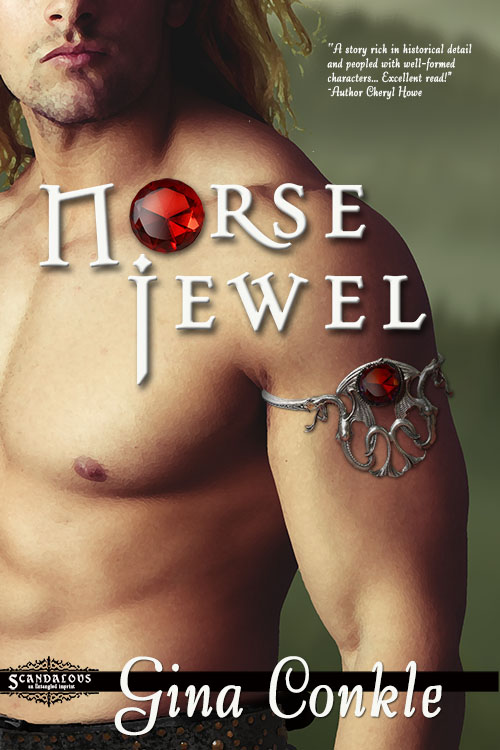 A stolen woman of rare qualities… Seized by marauders and taken to the icy northlands by the wolf-eyed Viking warrior, Helena will do whatever it takes to earn her freedom and return to France.

A mighty Viking Chieftain… Betrayal has turned Hakan’s heart to ice, but the spirited Frankish maid warms him in a way he’s never known. The spell she weaves leaves them both breathless, but can he keep his promise to return her home even if it means he’ll lose his precious jewel forever?

The party begins today and continues for the next three weeks as Gina burns a scorching path through fifteen different blogs with interviews, guest posts, and fun historical trivia about Vikings and medieval life.

But that’s not all! At every blog stop along the tour, you’ll have a chance to enter Gina’s Viking-sized giveaway with a grand prize of a $100 Williams-Sonoma gift card, and runner-up prizes of $25 Amazon and B&N gift cards. The winners will also receive three special wooden spoons…curious why? Read Norse Jewel to find out!

June 21 – Notes From A Romantic’s Heart

June 25 – For The Love of Bookends

June 27 – Swept Away By Romance

Want to learn more about Gina Conkle? Check out her answers to our Straight Talk questions below! 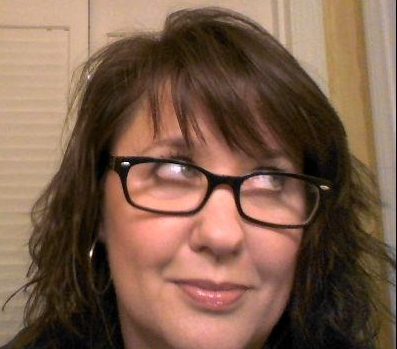 I write the conversation that keeps playing in my head. Then, I get my nerd-girl history books out and dig for details about that time and place. At the same time, I’m making character bios and writing any scene snippets that won’t go away.
How do you celebrate when you finish writing a book?

Time to indulge in excess reading! A spa day (ok, really a facial or massage only, can’t do the whole day anymore…don’t have time).

Character. But plot, while hazy, hangs in the background.
What was the inspiration for your book?

Can you say “Maximus Decimus Meridius?” My all-time favorite movie is “Gladiator” in fact his powerful monologue to Commodus after the first coliseum fight is my husband’s ringtone when he calls me. You know: “My name is Maximus Decimus Merdius, Commander of the Armies of the North, General of the Felix Legions…” I’ve watched that movie umpteen times, and one of those times I had been reading “Vikings: the North Atlantic Saga.” My “what if” moment was: What if a Viking chieftain wants to lay down his sword just like Maximus? That’s how Norse Jewel was born…I saw a stolen Frankish woman saved by a Viking chieftain who wants to lay down and his sword and farm.
Who would play your hero/heroine in the tv or film version of your book?

Charlie Hunnam (Sons of Anarchy) is Hakan! Cobie Smulders (How I Met Your Mother) is Helena.

One of the best pieces of advice came from Bob Mayer. He posed this question: Is writing your job or your hobby? That’s my “Big” thinking advice. Ask yourself that question. Then, look to see if your actions follow your words. Make changes from there. The “smaller” advice: Embrace active verbs. Too many passive verbs in a story, a blurb, or whatever equals bland writing.
What jobs have you had on your way to becoming a writer?

I worked in biotech marketing & sales, and I was an elementary school teacher
Do you prefer print books or eBooks? Print! But, I have a Nook. I’m trying to build up my “keeper” list on my Nook…a quick grab in case of natural disasters. We were evacuated in the middle of the night once due to wildfires.

I like to balance Norse hammers with the Georgian era. I’m working on more Vikings stories (a follow up to Norse Jewel titled Norse Fire and another series called “The Forgotten Sons” about a band of Viking mercenaries). My Georgian era series (tentative series name is “Meetings at Midnight”) comes out next year.

Thanks, Gina! Don’t forget to pick up your e-copy of Norse Jewel, on sale now!

My name is Jody Holford and I am both a contemporary romance and cozy mystery author. What I love mo…

We had the chance to ask Natalie Anderson a few questions.  She answered them…all the way from…