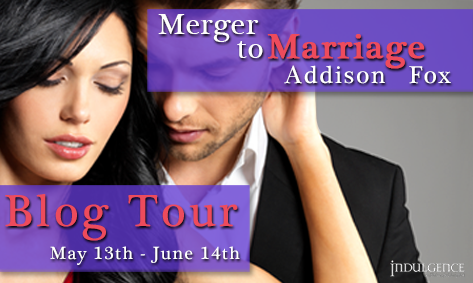 Join us on Addison Fox’s blog tour for Merger to Marriage which kicks off today for interviews, guest posts and giveaways!

One night of passion…
Mayson McBride has spent the last decade restoring her family’s magazine empire with her two sisters. She loves what she does,  but she can’t shake the feeling something’s missing. Which is why she jumps at the chance–incognito–for a single night of no-strings-attached sex  with Holt Turner.
A once in a lifetime connection…
Holt’s been unable to forget the woman he shared one night of explosive passion, and he’s thrilled to get reacquainted with her at a weekend house party. What he doesn’t expect are the immediate feelings of need and desire–emotions he keeps firmly in check–upon their reunion.
A forever commitment…
When Mayson and Holt’s single night together leads to unexpected consequences, both must decide what matters most. Especially when a threat from Holt’s past promises to ruin their relationship before it’s barely begun.

Pets, Edits…Snags. We authors put up funny memes, inspirational posts, and maybe even the occasional…

My latest book, Leaving Everest, is all about climbing Mount Everest. But you don’t ha…