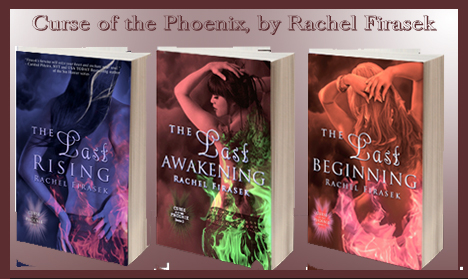 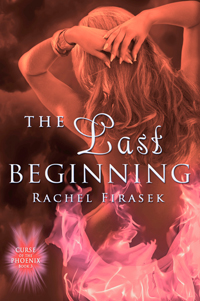 It’s happy release day for Rachel Firasek and The Last Beginning, the third and final installment in her riveting Curse of the Phoenix Trilogy!  To celebrate, she sharing her book trailer, as well as her process, another awesome creative outlet she has.  Can we just say, the girl has talent.

About The Last Beginning

Though she’s always hated being a phoenix, Sadie has to admit immortality has its advantages. She’s seen and done more in the last 150 years than she’d ever dreamed of, but she can’t get past the fact that Osiris has done nothing but manipulate her and her fellow phoenixes.

Or that, when her last incarnation as a phoenix comes to a fiery end, the fire slowly begins to consume her body.

Sun god Osiris is ashamed of his role as ruler of the Underworld, but he unless he can figure out how to save Sadie, that’s exactly where she’s going to end up. Permanently. Terrified he’s going to lose her, he takes her on a hunt for The Book of the Dead, which is the only way he knows he can save her—even if it means she’ll hate him forever.

It’s a sad moment to say goodbye to all of my lil’ birds, but I’m also very excited to see them out in the world. To celebrate, I’ve created a trailer that I hope will show you a brief picture of the story.

I told the Entangled Publishing crew that I was keeping this trailer a hush-hush and they lovingly allowed me to launch it from here today. Woot! I love these guys. So, if you would please take a moment and watch the trailer below.

Done? I hope you left a comment and will tweet and share on facebook. Now, no, this was not a cheap attempt to get you all to watch it, well…okay, it kind of was, but I’m also here to share. I’ve been creating trailers for only a couple of weeks and thought I’d share a bit about my creative process.
If you watched the video, here’s a breakdown, frame by frame, of the inspiration:

• The swirling vortex is supposed to represent the portal that the phoenixes and Osiris use to transport to Earth. The words represent the reincarnation that each phoenix must suffer.
• This frame stands for Sadie’s pure soul.
• The black with the swirly fingers at the bottom reminds me of the souls in the Underworld and the dark is like Osiris after so many years of loneliness.
• Is a transition and a reminder.
• The phoenix is the teaching tool in the story. She’s meant to punish the three women sentenced by Osiris for sins from the past.
• But, the phoenix has a heart of her own that inspires more than just the lessons Osiris wanted them to learn.
• Again, another ride through the portal and a reminder that something as fragile as love and sacrifice can change even gods.
• Osiris isn’t above the loss of those two important things.
• Now, we’re back to another spirit frame because Osiris is about to break his own moral code.
• And his last phoenix, Sadie, will be the one to suffer for his lack of sacrifice.
• With every rule or code broken, there are always consequences, even for a god.
• Sadie falls ill with a power that sets her on fire when she’s angry and leaves her weak when it passes.
• It will take all of Osiris’s self-control not to take advantage of her when she’s at her weakest.
• But, in the end, all of the sacrifice and love may come too late for a god intent on abusing his power and the natural progression of life.

So, there you go. That’s basically the story I wanted my trailer to tell and the reason for each of the clips. I hope you enjoyed the behind the scenes break down. Please feel free to share the video with friends and other readers. Thanks everyone!

From the Entangled Gang… We LOVE Rachel’s trailers!  She has such a gift.  We’re honored to have published Rachel’s Curse of the Phoenix series and hope you’ll give them a read!

With the release of The Cowboy’s Christmas Baby, I am in full holiday mode. From the ordering…