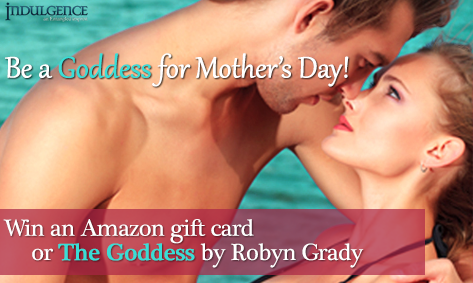 Indulgence books allow readers to escape reality for a few hours. And what better escape can you think of than to be trapped on an island with a Prince? To celebrate the release of The Goddess by Robyn Grady we’re giving away a $25 gift card for Amazon to one lucky winner and five runner-ups will receive a copy of The Goddess on release day, Sunday, May 12th.

Just share your ideal romantic escape with readers on the Indulgence Facebook Page HERE, then enter the contest using this handy Rafflecopter form.

There are lots of ways to WIN so good luck and be a Goddess for Mother’s Day! 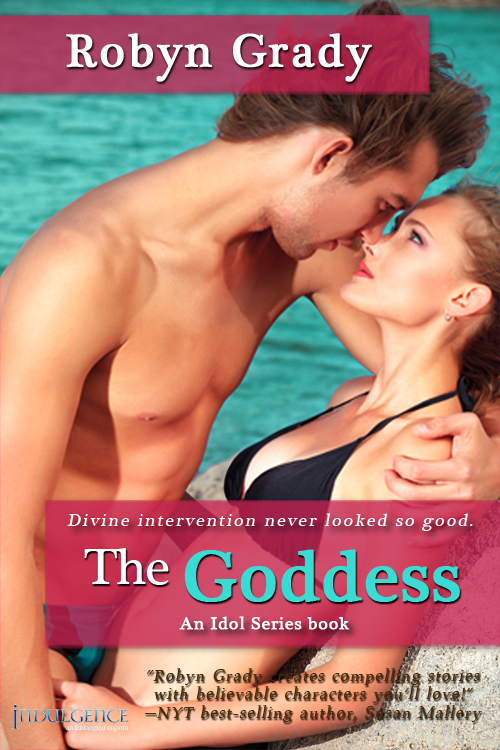 After college graduation, Helene Masters is excited to land a job in a picturesque Aegean kingdom. Tasked with sprucing up the Prince’s villa, she inadvertently finds herself trapped on the island with the sexiest man alive. Of course she has to fall for a man who is destined to only marry royalty.

Darius Vasily, Prince of Teirenias, can’t figure out what pretty, but accident-prone, Helene is doing at his private estate. After dousing him in paint, she disappears inside the secret cave holding the royal family treasure—a fertility statue, but a cave-in traps them both. Now Darius has to figure out how to save them before he kills her for getting them into this mess in the first place—or gives into their amazing chemistry. 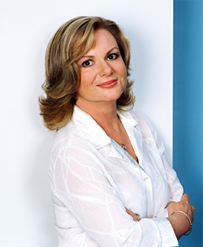 Robyn Grady was first published with Harlequin (Silhouette, New York in 2007 and Mills and Boon, London in 2008). Her books feature regularly on bestsellers lists and at award ceremonies, including The National Readers Choice, The Booksellers Best, Cataromance Reviewers Choice and Australia’s prestigious Romantic Book of the Year.

Recently, she signed a three book deal with Entangled Publishing for her IDOL contemporary romance series.

Robyn lives on Queensland’s beautiful Sunshine Coast with her real life hero husband and three daughters. When she can be dragged away from tapping out her next story, Robyn visits the beach or the theatre. These days she’d rather keep fit reliving her youth and shaking it to Just Dance than pretending to jog.

Robyn believes writing romance is the best job on the planet and she loves to hear from her readers.

Dream Nights with the CEO by Kathy Lyons Cover Reveal!

4 Replies on Be a Goddess for Mother’s Day!

by Coleen Kwan I grew up in a city, and I currently live in an even larger one, but small town livin…

The summer is sizzling and so are the Bliss deals!   Falling For Her Fiancé by Cindi Madsen Wha…