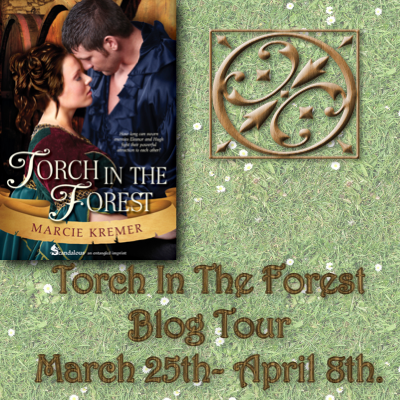 The tour for Torch of the Forest  by Marcie Kremer starts this week. Check out the tour stops for exclusive excerpts, interviews, and giveaways!

Eighteen-year-old widow Eleanor of Strathcombe is stunned to realize she has a powerful attraction to Hugh of Wykeham, the arrogant, neighboring lord returned from the Crusade. But he wants to marry her sister, and when he learns that poachers are running rampant he blames her and feuds with her over the control of their forest boundaries.

As she struggles to keep control of her forests and find the poachers, unsettling feelings confront her when she deals with Hugh, feelings she never felt in her brief, loveless marriage — feelings she tries to fight, because she knows Hugh to be a cold, harsh man who may have murdered his faithless wife in revenge — and who trusts no woman.

When she finds herself in the midst of a net of intrigue and lies, how will she find the courage to capture the conspirators, save herself and her sister, and overcome her feelings for Hugh?

Against the Wall Blog Tour and Major Giveaway

Just for the Summer Blog Tour

The blog tour for UNDYING DESTINY by Jessica Lee is starting on Monday! Stop by these sites for auth…

Our new Scandalous Books imprint has launched! Find out what makes our titles so Scandalous. Also, k…

Hey everyone! We are totally stoked to announce the hosts and schedule for Vivi Barnes’ OLIVIA…