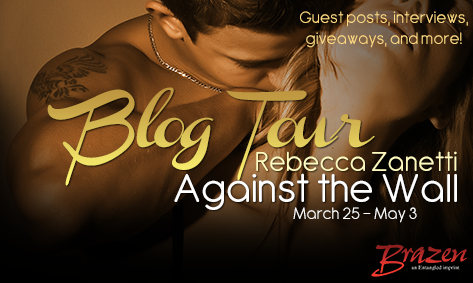 The tour for Against the Wall by Rebecca Zanetti starts this week. Check out the tour stops for exclusive excerpts, interviews, and giveaways!

Surveying the proposed site for a high-end golf course should have been a breeze for spunky Landscape Architect Sophie Smith. But when this born-and-bred city girl is suddenly—and quite literally—swept off her feet by a sexy cowboy on horseback, she realizes that the country life has some serious (and seriously steamy!) possibilities. That is, until she finds out exactly who her smokin’-hot wrangler really is.

Cowboy and Tribal lawyer Jake Lodge is desperately trying to block the development. And if that means playing hardball—and being every inch the shark lawyer—so be it. But Sophie is a distraction he didn’t expect. A distraction that makes his blood burn.

Two different worlds. Two opposing sides. And when they finally give into the exquisite temptation, the consequences will shake the foundations of both of their lives…

Torch In The Forest blog tour

0 Replies on Against the Wall Blog Tour and Major Giveaway