An Unsuitable Husband by Ros Clarke 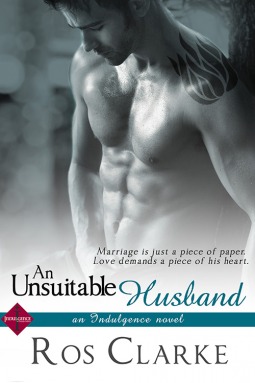 Theresa Chartley has no time for marriage, and no room for disappointment–especially with French soccer player Emile Renaud. Sure, he’s gorgeous, but he’s wrong for a career woman like Theresa. If only her mother would stop pressuring her to get married and let her live her own life. Finding a very unsuitable husband to shock her parents into silence and put an end to the marriage campaign is the only answer. Emile will do just fine.

Theresa’s outrageous proposal is the answer to Emile’s problem. They’re complete opposites living in different worlds, but a fake marriage will let him ditch his clingy ex once and for all. Then he’ll be free of commitment and free to live his life the way he wants to.

A contract. Twelve months. And they walk away scot-free.  But a year of marriage tests them both in unimaginable ways. Maybe Emile isn’t unsuitable after all, but how can Theresa let herself love him when she signed a contract to let him go?

Behind the Book with The Elusive Wife, The Duke's Quandary, and Callie Hutton