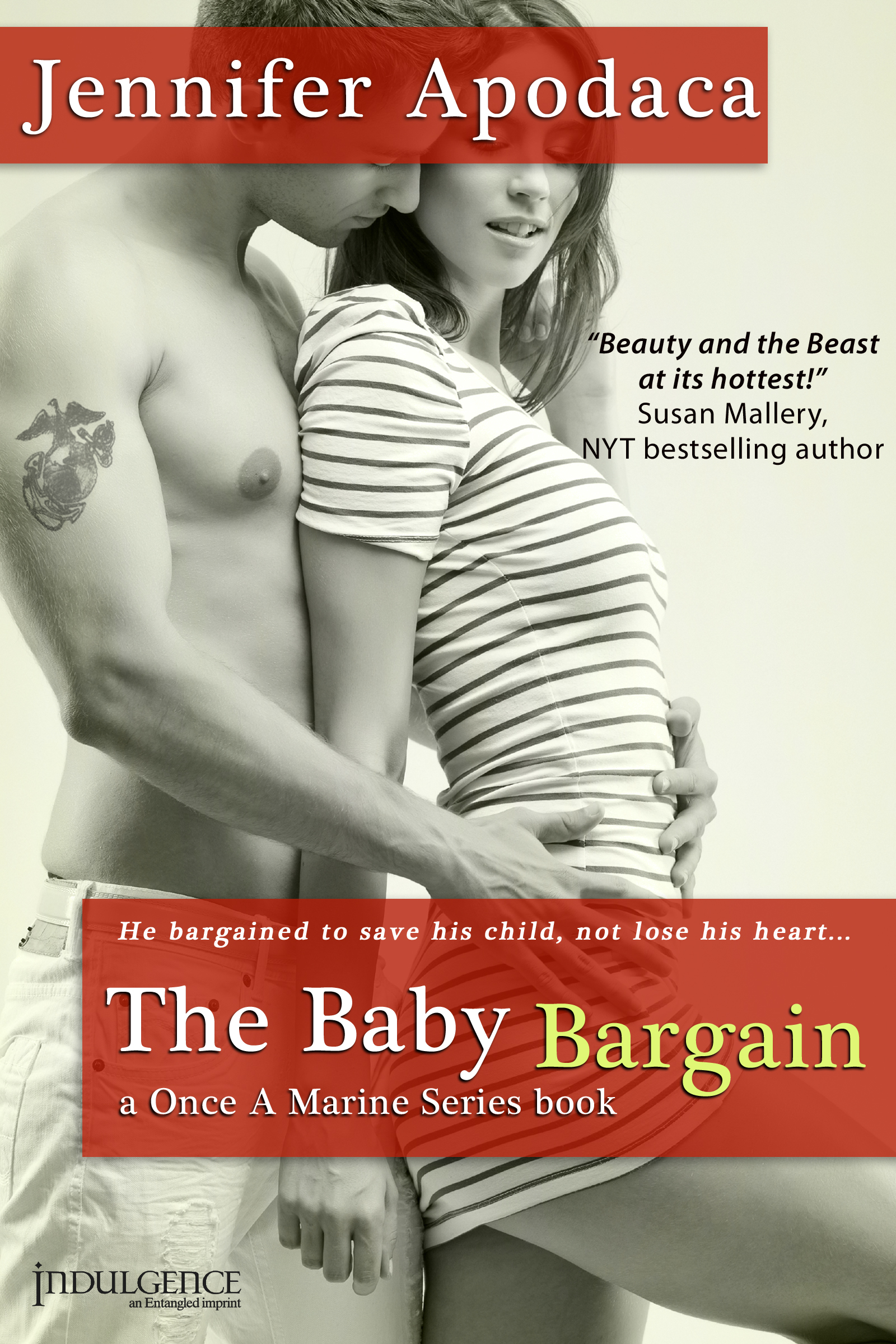 The Baby Bargain by Jennifer Apodaca is

To celebrate, we’re running a contest!

Tell us the top 3 reasons why you loved The Baby Bargain and one lucky winner gets 5 free Indulgence books of his/her choice! 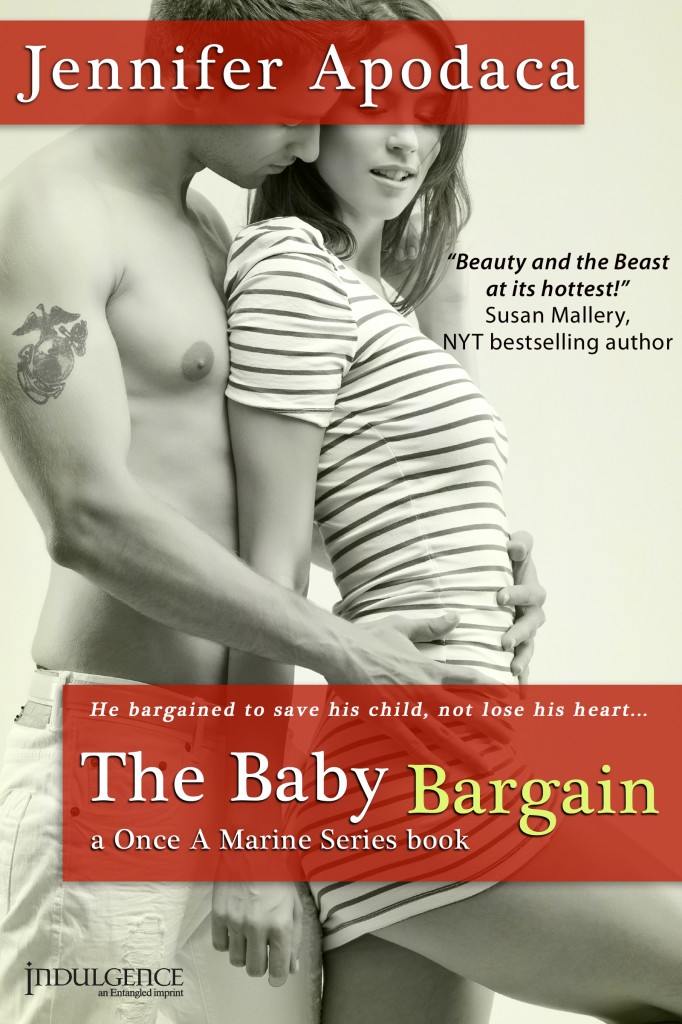 Seeing Adam Waters is the last thing veterinarian Megan Young expects. Ex-Marine. Ex-boyfriend. And still extremely dangerous territory. But Adam doesn’t know the secret Megan has been keeping from him. The secret that was created three years ago, after their last night together…

Adam returns to Raven’s Cove to sell his home in a final break with the town and memories that haunt him. The problem is that his attraction to Megan is as blazing hot as it ever was. But when a vicious smear campaign against Megan turns ugly, Adam learns the truth he never knew—he has a son.

Now the only way Megan can protect her child is to strike a bargain with Adam. And it’s a bargain that looks a lot like blackmail…

If you haven’t read The Baby Bargain yet, here’s an exclusive excerpt to tempt you!

Adam frowned, realizing that she probably hadn’t had more than a couple of hours’ sleep. It was around three a.m. now. He set his cup on the floor, settled behind her, and placed his hands on her shoulders.

She flinched. “What are you doing?”

“Rubbing your shoulders. Relax, Megan. I’m just thanking you for saving my dog.” He began kneading, feeling her velvety soft skin over knotted muscles. He worked her upper arms and shoulders, then moved to her neck and the space between her shoulder blades. Using his thumbs, he stroked up and down, pressing and rubbing.

She bent her head forward and groaned.

That sounded like a sexy purr, vibrating right through him and straight to his groin. Her sweet pear scent filled his lungs and made him long to taste her. The pale skin of her shoulders and arms had just a hint of sun-kissed color and a light dusting of freckles. He resisted the temptation to brush his lips over the nape of her neck. Instead he said, “Thank you, Meg. I know I dragged you out of bed, and you won’t get much more sleep tonight.”

It stung as he realized that he wanted to be more special to her. He shifted, stretching his legs out on either side of her. Then he leaned against the table and tugged her back to his chest. Before she could protest, he said, “See if you can sleep. I’ll keep an eye on Ellie and wake you if she needs anything.”

She looked over her shoulder at him. “This isn’t a good idea.”

He brushed a stray strand of hair from her face. “You’ve slept in my arms before.”

“That was a long time ago, Adam. Another lifetime.”

He stared at her, couldn’t look away. For a second, he wished things could be different, that they could build a life together, but Adam knew better and locked down that desire. That was how he functioned. He would not burden another with his private hell. He would never be able to bear her looking at him with the same hatred or disgust as his own mother had.

Adam forced a gentleness over his rough emotions. “I just intend to hold you so you can sleep.”

She twisted around so she could see him and let her eyes roam over his face, as if she were trying to see into his very soul. “What about you? Aren’t you tired? You could go home and I’ll call you when she’s out of danger.”

“I don’t sleep much.” He never talked about his nightmares and insomnia to anyone. Recovering, he added another reason. “And there’s no way in hell I’m leaving you here alone.”

Her eyebrows drew together. “I’m here alone at least once a month dealing with an emergency. Actually, I usually bring Max. He’s pretty good protection.”

“Smart.” He wrapped his arms around her, enjoying the feel of her against him. “But you didn’t bring him tonight. You knew you’d be safe with me.” He liked that. A lot.

She put her hand on his arm. “Why don’t you sleep, Adam?”

He had a big mouth. What was it about Megan that reached through his defenses?  “All the travel in the military has messed up my sleep patterns.”

She was silent, rubbing her thumb back and forth on his wrist. “You wanted to travel, wanted to be a hero. Did it turn out the way you thought?”

Caught by surprise, he leaned his head back and thought about it. “I wanted to make more of a difference, but no matter what my team achieved, it was never enough. If we eliminated one threat, six more took its place.” And good men died horrible deaths.

58 Replies on THE BABY BARGAIN is a Barnes & Noble Bestselling Book!