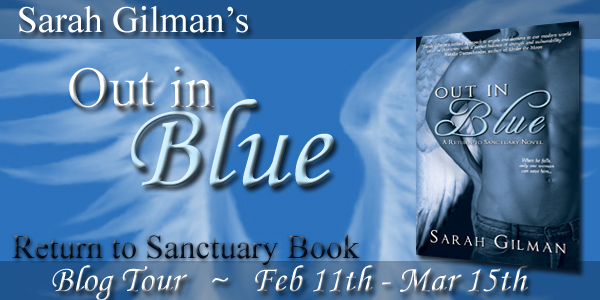 To celebrate the re-release of Out in Blue by Sarah Gillman, we’ve put together a blog tour and a scavenger hunt!

In a violent world where fallen archangels are hunted for their valuable plumage, Wren knows one thing for certain: the human woman who saved him from a poacher attack will die if she stays with him. The demon responsible for his parents’ gruesome deaths two decades ago pines for the chance to rip apart any woman who stands under Wren’s wing.

Wren doesn’t expect Ginger to stay by his side once she discovers his ability to drain life with a mere touch, yet she lingers. When an unusual talent of her own reveals the location of Wren’s father, Wren’s isolated world implodes. With the help of the demon protectors he’s sworn never to trust again, Wren risks everything to rescue his father, confront the demon who stalks his and Ginger’s every step, and claim his eternity with the most courageous woman he’s ever known.

1 Reply on Out in Blue Blog Tour & Scavenger Hunt!

The Don’t Bite the Bridesmiad tour kicks off tomorrow! Tiffany will be visiting blogs with fun…