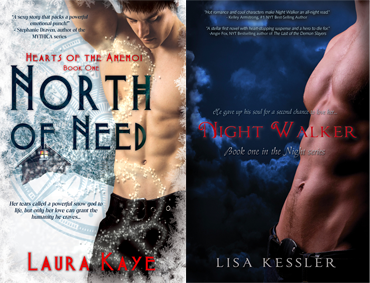 The Authors After Dark 2013 Bookie Nominees have been announced and Entangled is so thrilled that some of our authors have been nominated for awards!

Here are the categories Entangled Publishing and/or our authors are nominated for!

Congratulations to all nominees – be sure to head over to Authors After Dark on November 1st and vote for your favourites!

Hearts of Anemoi – Book One – by Laura Kaye

Her tears called a powerful snow god to life, but only her love can grant the humanity he craves…

THE NIGHT WALKER
The Night Series – Book One – by Lisa Kessler

Two and a half centuries ago, Calisto Terana lost everything when a zealous priest murdered the woman he loved. Now, desperate for another chance to love her, he wants redemption for the mistake that cost her life.

She’s haunted by dreams of her own death…

After catching her fiance with another woman, Kate Bradley returns to San Diego to clear her head. The last thing she needs is romance, but after meeting Calisto she’s drawn to him in ways she doesn’t understand.

They’ve waited in the shadows for centuries…

Calisto has no doubt Kate is the reincarnation of his lost love, but the Fraternidad Del Fuego Santo has a new watcher with dark ambitions of his own. As old enemies re-emerge and a new threat arises, the betrayal that enslaved Calisto to the night might destroy the only woman he’s ever loved again.

Behind the Book Submission

Being an author is interesting. Allow me to explain the creative process using The Good Place…