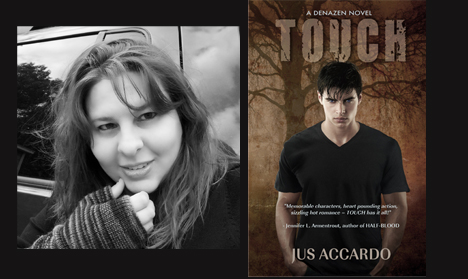 That dynamic art department here at Entangled has been busy, busy again.  Jus Accardo’s YA paranormal romance, TOUCH, is too hot to handle.

When a strange boy tumbles down a river embankment and lands at her feet, seventeen-year-old adrenaline junkie Deznee Cross snatches the opportunity to piss off her father by bringing the mysterious hottie with ice blue eyes home.

Except there’s something off with Kale. He wears her shoes in the shower, is overly fascinated with things like DVDs and vases, and acts like she’ll turn to dust if he touches her. It’s not until Dez’s father shows up, wielding a gun and knowing more about Kale than he should, that Dez realizes there’s more to this boy—and her father’s “law firm”—than she realized.

Kale has been a prisoner of Denazen Corporation—an organization devoted to collecting “special” kids known as Sixes and using them as weapons—his entire life. And, oh yeah, his touch? It kills. The two team up with a group of rogue Sixes hellbent on taking down Denazen before they’re caught and her father discovers the biggest secret of all. A secret Dez has spent her life keeping safe.

A secret Kale will kill to protect.

And now, we have another cover for you to drool over.  Can you handle it?  Two in a row?  Here’s Touch… 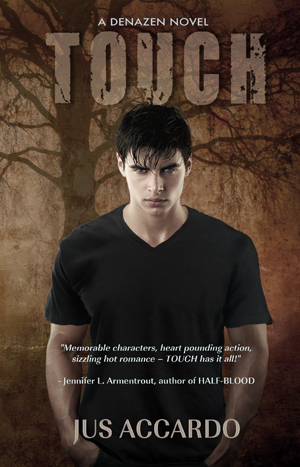 6 Replies on What? Another Cover Reveal? Touch, by Jus Accardo…

At the Romantic Times Booklovers Convention a few weeks ago, twelve intrepid authors (and two intrep…

I may be a city girl who’s lived in New York for over a decade, but I love hiking, skiing, an…