Kacy Cross here to instigate an all out war on the best kind of hero—cowboy or military? You know we all have an opinion!

Confession time. I’ve been watching “Yellowstone” and while I like the characters, cowboys don’t hold a candle to military heroes. I know, I know, it’s blasphemy. Cowboys have the mystique, the jeans, the hat.

Military heroes have something else, something in their soul that makes them have character as opposed to being one.

My favorite military hero is my grandpa, who is one of the oldest living WWII survivors. He fought in France and came home to be a firefighter in New York. My dad went into the military too (I broke the tradition because let’s be honest, all I’ve ever wanted to be was an author and I don’t like wearing uniforms unless you count yoga pants). So I come by my preferences honestly.

When I see a cowboy, that song by Tim McGraw comes to mind: they’re moody, restless, and always smell like horses. It’s just the cowboy in them.

A soldier on the other hand automatically makes me think about honor, sacrifice, bravery. Qualities that any woman would love in a man. Sure, if the guy is still enlisted, there’s that “always leaving” factor to consider, which is why I always write about guys who are ex-military. Best of both worlds.

On that note, ex-Army Captain Zero Renshaw is the hero of my latest book, The Cowboy’s Sweet Redemption.

What’s this? I wrote a book about a cowboy? You caught me. I figured why choose, right? 🤣

The thing is, Zero’s not really a cowboy. He inherits a ranch and does his best to become one. But in his heart, he’s still a soldier. His brother in law was under his command and he died in a skirmish that Zero blames himself for. ( tortured heroes are the best. SEE!!! Soldiers all the way, baby) So he left the service to come home and turn the place he now owns into a working ranch in order to take care of his widowed sister and her son.

Swoon. I know, I was hooked too.

Then there are these dogs…they belonged to his grandpa and they are not all that interested in herding cattle or doing other cow dog type things. Enter Delilah Kersey, a doctoral candidate desperate for a job. Zero is desperate for something to go his way in this cowboy gig. He hires her to train his dogs because she convinces him she can do it. She can! Probably! There’s this little, tiny, insignificant detail about how she’s never trained a dog before. But how hard can it be?

Find out in The Cowboy’s Sweet Redemption. No cowboys were harmed in the writing of this story. But two people do find out maybe they aren’t the sum of their titles and that love guides you toward who you’re meant to become. I’d like to think that Zero is the best part of both kinds of heroes. He does have a Stetson after all…

I’m still gonna fight you if you say cowboys are better, though. 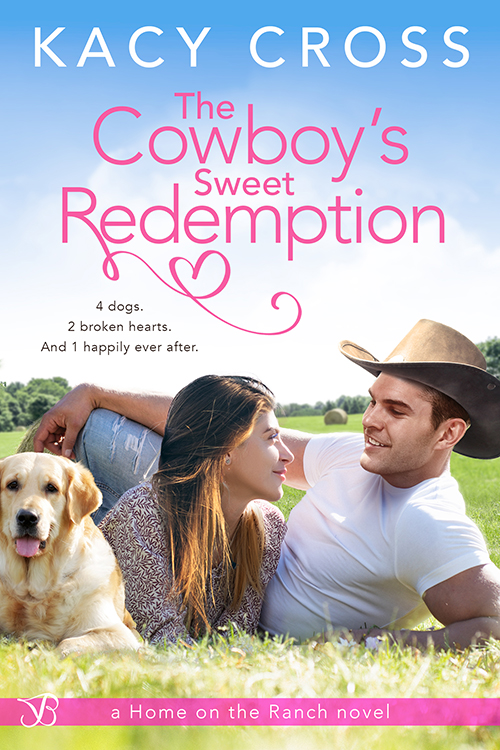 In order to finish her doctorate, grad student Delilah Kersey needs a job. Any job. So when she overhears a  gorgeous rancher describing a job opportunity, she’s all in—if she can convince him she’s a real dog trainer. Of course, no one prepared Delilah for a chaotic household with four unruly dogs and a sexy new boss whose bedroom is right next door to hers.

Military vet Zero Renshaw’s return to civilian and family ranch life hasn’t been easy. He needs to transform four horrible dogs—who can only be described as a menace—into obedient cattle herders. But with his family still reeling from a shattering loss, Zero will do anything to make things better…even hiring an unpredictable dog trainer who’s more temptation than he can resist.

Now Delilah is transforming every aspect of Zero’s tightly-regimented life. She even seems to be healing his family, including his small, broken-hearted nephew. But Zero has no room for mistakes…even if he’s falling for the best one he’s ever made.

Kacy Cross writes romance novels starring swoon-worthy heroes and smart, lovable heroines. She lives in Texas and is raising two mini-ninjas alongside the love of her life who cooks while she writes, which is her definition of a true hero. Come for the romance, stay for the happily ever after.