In June of 2018, I was lucky enough to be able to travel to Scotland to research my latest book, Some Like It Plaid. The main part of the story takes place in 156 A.D. when the Romans still occupied the Antonine Wall. I’d decided to make the hero’s tribe located at Dunadd, an Iron Age fort and later the capital of the Scottish Gaelic kingdom Dal Riata.

I made Arrochar, Scotland my “home base” and during the course of the week I explored the nearby Roman ruins as well as getting a good feel for Dunadd and the surrounding area. I made the trek to Dunadd twice that week.

Near Dunadd is an excellent local history museum whose collection spanned from the Iron Age to early Christianity in the region. 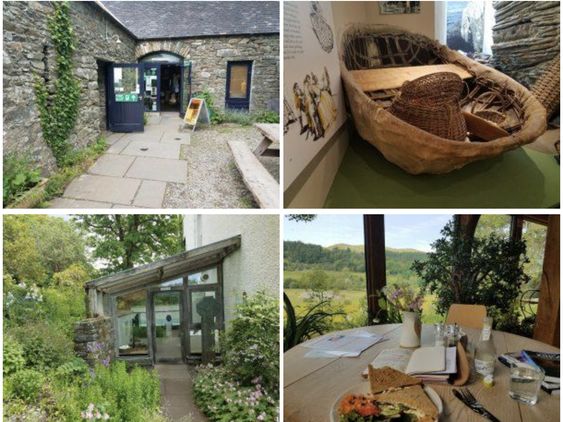 Next stop was the actual location of the hero’s stronghold. The day turned from drizzling to gorgeous, and I was amazed that I was walking around in a short-sleeved top. The hike was a little taxing as the climb is steep and rocky, but I took my time as I did not want to slip and fall. There are four terraces, but it seems like habitation back then was only on the upper three. Even the view from the lowest terrace was stunning! 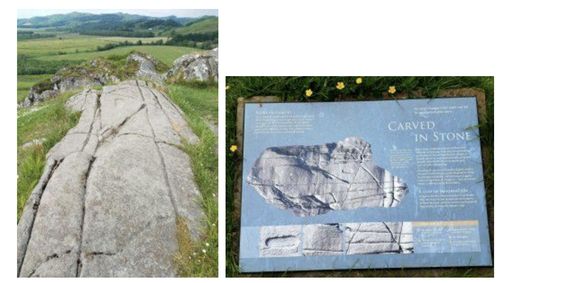 Dunadd and the footprint used to inaugurate kings

I revisited this site two days later and took 360 degree photos and while there noticed things I hadn’t before–maybe because I wasn’t constantly going OMG about the view?

I took scads more pictures and this time drew a better outline that included the lower tiers (the first time I just did the upper ones) and in sketching the first tier I explored how far it stretched and noticed it had a much gentler slope up to the third tier, bypassing the official dramatic, but steep entrance. I also noticed some other approaches they could have used too, so it gave me a better idea of how they might have used the space. 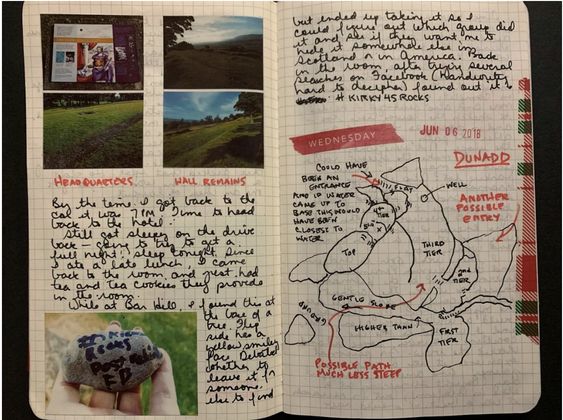 Part of the time-travel/druid-magic in the story centers around a nearby cup and ring site, so I visited the ones at Achnabreck, the largest in the world. It sits up on a hill overlooking the Kilmartin Glen, another stunning view, though not translated well in the photos. It’s both fascinating and frustrating to see these carvings and not knowing why they were made. If only we could really go back in time 😉 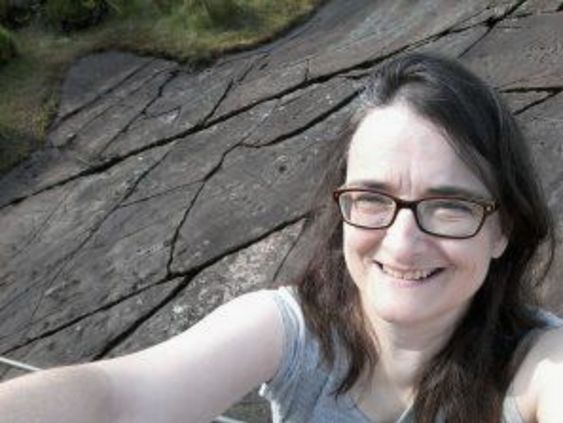 Check out Angela’s new release Some Like it Plaid, out now!

When Ashley Miller sees a Craigslist ad for an all-expense paid vacation to Scotland with a handsome Highland “escort”, she’s all over it. Worn out from working two jobs to pay off the debts her scam artist ex-husband left her with, she just needs a friggin’ break already. Rolling, misty mountains of the Scottish Highlands, here she comes!

But one minute she’s sipping a latte and the next she’s zapped to the 2nd century and promptly informed she’s managed to wed her handsome Highlander without even an “I do.” Oh, hell no.

After a devastating tragedy, Connall’s tribe is left with few marriageable women. When his Druid priest suggests a place filled with bonnie lasses, he of course agrees to go fetch one for himself. But nothing prepared Connall for his sassy new wife, nor his tribe for a woman determined to see equal rights for all women.

Now the men are threatening revolt if he can’t rein his young wife in, but it might be too late. The women are demanding the men get “woke”—which of course makes no sense because they already woke that morn—and give women “the vote,” whatever the bloody hell that is. Despite all that, Connall can’t stop wanting to convince his wife to get naked, and he’s starting to wonder if he’s been bewitched.

Only the more he gets to know her, the more he starts to think she’s just what they needed. If only he survives her next demand…

Angela Quarles is a RWA RITA® award-winning and USA Today bestselling author of contemporary, time travel, and steampunk romance. Library Journal named her steampunk, Steam Me Up, Rawley, Best Self-Published Romance of 2015 and Must Love Chainmail won the 2016 RITA® Award in the paranormal category, the first indie to win in that category. Angela loves history, folklore, and family history and combined it with her active imagination to write stories of romance and adventure.

That’s right, we’re celebrating the launch of Dead Sexy by giving away a Nook Simple Tou…

Rachel Firasek grew up in the South, and despite the gentle pace, she harassed life at full steam. H…

This Halloween, get SpOoKy, get FuNkY.  Get down this October with AlL EnTaNgLeD EvE.   Entangl…