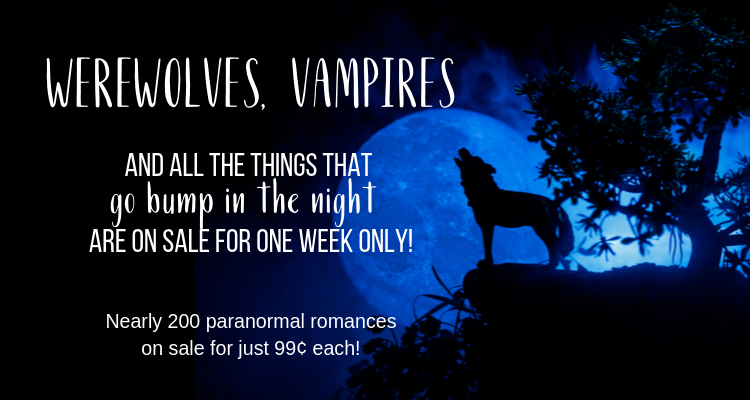 If you love a little bite to your romances check out these vampire romance steals!

The Black Lily by Juliette Cross

Every day, the threat the Varis family poses to the humans they rule over grows stronger. Every minute that Arabelle spends doing chores for vain, entitled aristocrats, her resolve to overthrow the vampire monarchy increases. She is the leader of the underground resistance, The Black Lily. And she’s waited long enough.

Now is the perfect time to ignite the rebellion. The plan? Attend the vampire prince’s blood ball. And kill him.

Dagger in hand, Arabelle is caught off guard by the immediate spark she shares with Prince Marius. It doesn’t help that he’s listening to her and seems so kind and understanding.

Arabelle is sworn to kill Marius at all costs, but what if Prince Charming is more than he appears to be? But the big question? Now that he knows the truth can she do what she must to save her people?

Baby’s Got Bite by Candace Havens

Bennett Langdon has a firm no-relationships policy. Still, it doesn’t stop her from hooking up with a super-sexy bad boy at her best friend’s wedding. After all, it’s only one night—what harm could it do? Ten weeks later, a pregnant Bennett has her answer…

Linc Monahan can’t believe it. This wasn’t supposed to happen. He’s a werewolf, and shouldn’t be able to father a child with a human. Now Linc has to find some way to tell Bennett that not only do werewolves exist, but she’s about to have a baby with one.

But when word of their surprise conception gets out, the fur hits the fan. There are people who don’t want this baby to be born—even if it means killing. Now Bennett and Linc aren’t just fighting each other…they’re fighting for their lives.

It was her destiny…Tara Collins just wants to be normal. Everyone else wants her dead. Tara’s eccentric aunt raised her to be fearful of the world and follow the rules. But after her aunt’s death, Tara is ready to take control and experience life for the first time. But she quickly discovers that everything she’s been told is a web of lies. Determined to solve the mystery of who she is truly, she hires private investigator to help her uncover the truth.

Christian Roth is more than your average PI. A vampire and ex-demon hunter, Christian lives among the humans, trying to be “normal.” But recently, things seem to be falling apart. There’s a crazed demon hell-bent on revenge hunting him down, and a fae assassin on the loose with an unknown target. And the Order he abandoned desperately needs his help. As the secrets of Tara’s past collide with the problems in Christian’s present, she finds herself fighting her attraction to the dark and mysterious investigator. Falling in love does not fit into her plans at all, but Tara soon learns that some rules are meant to be broken.

Over 300 years ago, an ancient female vampire turned Kenric St. James against his will and killed the woman he loved. Now, Kenric has found a woman he finally burns to claim as his own again, but he knows loving her means giving his sire another target.

Emily Ross just wanted a fresh start. She’s a survivor, coming off the tail end of an abusive relationship, and craves time alone to learn who she is. The last thing she needs is a controlling alpha male calling all the shots.

Meeting Kenric might just have changed her mind, though. He is wrong for her in all the right ways. But in order to keep her heart from breaking, he first has to keep the hordes of evil vamps from stealing her very breath.

She gets her sexy neighbor all to herself… problem is, he bites.

Alice Shepard needs one thing: a date for her sister’s wedding. And not just any date. A hunk who will make her fiancé rue the day he left her for her best friend. Her drop-dead gorgeous neighbor fits the bill—even if he is a bit quirky and never comes out during the day—and Alice has downed just enough appletinis to ask him. But she makes it quite clear that there will be no funny business.

Spending a week on a cruise ship full of humans while sleeping close to his sexy next-door neighbor sounds like a helluva bad idea to vampire Noah Thorpe. But his friends need time to get him out of a shotgun wedding—a vampire bonding that will tie his fate to a female vampire he’s never met. And Alice’s offer comes at just the right time.

What could possibly go wrong?

Find all our vampire romances and more steals here!