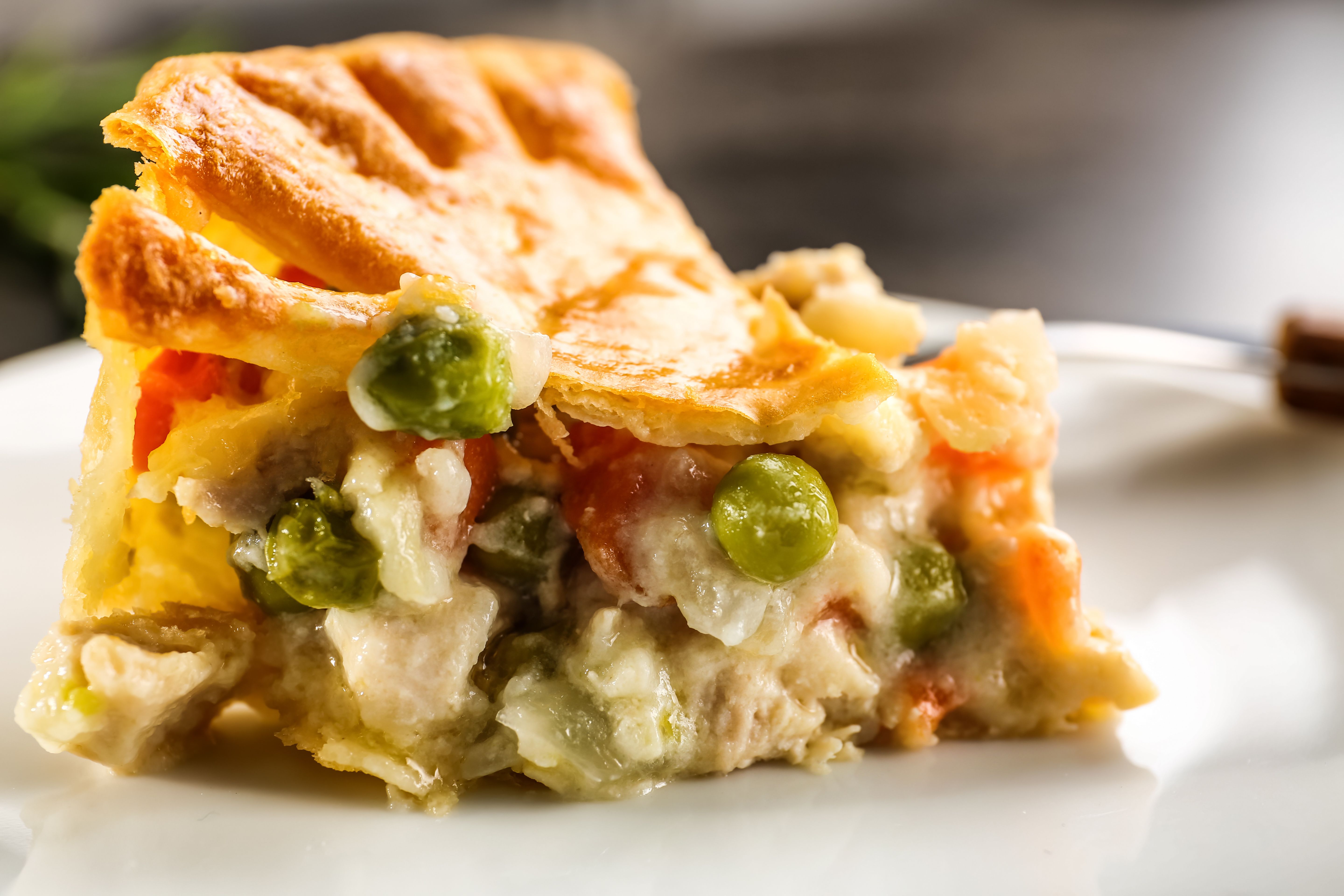 Who tried it: L.E. Rico, author of Mischief and Mayhem

This recipe is on the menu for my Easter Sunday brunch. Along with some grits. And banana pudding. Oh, and some fluffy biscuits.

I hope you try both the book and the recipe. I think you’ll find both to be complex, rich…and addictive.

Preheat oven to 425 degrees F. Chop the potatoes into small cubes and place into a microwave safe dish. Cook on high for 3 minutes; add carrots and peas (or mixed vegetables), return to microwave for 3 minutes longer on high, or until potatoes are tender.

In a large skillet, heat the butter over medium heat; add the flour in a tablespoon at a time, stirring in before adding the next. Cook, stirring constantly until mixture is bubbly and there are no remaining lumps, about 5 minutes. Slowly begin to incorporate the chicken stock, stirring vigorously until fully incorporated. Add in the seasonings and stir in well. Remove from the heat, add the salt, pepper, rosemary and thyme. Stir in the half and half until smooth.

Stir the chicken into the cream mixture, then add the potatoes, the carrots and peas; mix well. Taste and adjust seasonings as needed. Unroll one of the pie crusts and place into a 9-inch, ungreased deep dish, glass pie plate. Gently press the crust down into the bottom and edges of the pie plate. Pour the hot filling into the crust and top with the remaining crust, tucking the top crust up under the edges of the bottom crust. Flute the edges and cut vents into the top of the crust.

Bake at 425 degrees F for 15 minutes. Remove and place strips of foil around the edges of the crust to prevent overbrowning. Return to oven for an additional 15 to 25 minutes, or until crust is golden brown and filling is bubbling. Let stand for 5 minutes before cutting.

With all that extra time not spent in the kitchen, what’s L.E. currently reading?

Delia Owens’ novel, Where the Crawdads Sing is something really special—a rare combination of literary fiction, love story, coming-of-age, and mystery—penned so beautifully as to make every sentence I’ve ever written feel about as special as a pigeon standing next to a peacock.

It’s been a long time since I’ve read a book that’s made me happy and sad, riveted, horrified, heartbroken, elated, shocked and…hungry. But Where the Crawdads Sing gave me all of those feels and so many more. With passages that read more as lyrical poetry than commercial fiction, Owens left me enamored of a world I’ve never seen. A world filled with insects and grasses, trees and fish, birds, flowers and all manner of creatures. The world of the marsh.

When we first meet Kya, she is a frightened little girl who is abandoned, in turns, by her mother, her siblings, and her father. She is, instead, raised by Mother Nature. The birds are her friends, the fireflies her teachers, and the waterways her playground. As I followed her journey, I, too, longed to be surrounded by the gulls who flew and leapt and danced across her feet on the sandy beach of her lagoon. I felt the sting of cruelty with her realization that she didn’t fit in with the townsfolk—would never fit in with the townsfolk—and would forever be consigned to the status of “marsh trash.” My heart broke for her as, one by one, every single person she’d dared to count on—dared to care for—left her.

As the years go by she tries and fails and tries again to master the skills needed to survive on her own… How to stay safe, how to stay healthy, how to stay sane…and, perhaps the most basic of all, how to stay fed. Calling upon vague memories of her long-gone mama’s cooking, Kya uses trial and error methodology for years before she finally grows tall enough, mature enough, and strong enough to manage some decent meals on her own.

Chapter after chapter I read of grits. Lots and lots of grits. Corn mush, soda crackers and beans. Later on, there were special days that involved picnics with chicken and cake. Sometimes there were fluffy biscuits. But Kya’s favorite by far—and something we only see her consume perhaps twice during the span of her story, is chicken pie. It was the only good thing that came of the single day of her life that she attended the local school:

She’d eaten chicken pie only a few times in her life, but she could still see that golden crust, crunchy on the outside, soft inside. She could feel that full gravy taste, like it was round. It was her stomach acting on its own that made Kya stand up among the palmetto fronds… A large window with a counter opened into the kitchen, and laid out before her was an enormous enamel pan of chicken pie crisscrossed with thick, crispy pastry, hot gravy bubbling up. A tall black woman, smiling and calling some of the kids by name, plopped a big helping of pie on her plate, then some pink-lady peas in butter and a yeast roll. She got banana pudding and her own small red-and-white carton of milk to put on her tray.

Mmmmmmm. And, while I’d just as soon skip right to the banana pudding, I thought I’d track down a recipe of chicken pie in tribute to a character I was loathe to turn the last pages on.

Get Mischief and Mayhem by L.E. Rico for just 99¢!

Welcome to Mayhem, Minnesota, home of the Knitty Kitty, The Little Slice of Heaven Pie Shop, and O’Halloran’s Pub—owned by the four young women known as The Whiskey Sisters.

In the wake of her divorce, Jameson O’Halloran has gone man-vegan. And this is one diet she’s determined to stick with. Even when her long-lost ex-brother-in-law shows up looking like two scoops of double dutch dipped in chocolate… She’s not giving in. Been there and still wearing the messy T-shirt.

It’s been a decade since Scott Clarke left his family and his hometown, never to return. But when tragedy strikes, he finds himself dragged back to the land of gossip, judgment, and the one woman he absolutely, positively, without a doubt can never have. His brother’s ex is off-limits. He just needs to keep repeating that to himself until it sinks in.

L. E. Rico was going to be principal French horn of the New York Philharmonic. That was her plan, anyway. The New York Philharmonic had no idea of her intentions, and that’s probably a good thing, since she wasn’t an especially good French horn player! Lauren was, however, an exceptionally good classical music radio host. She has made a career of demystifying classical music for her audiences by taking it off a dusty old pedestal and putting it into a modern context. Lauren has recently discovered a passion for writing, which she’s managed to combine with her love and knowledge of the classical music world. She also writes new adult under Lauren E. Rico.

We have some cover love for Victoria James’ upcoming release, Falling for Her Enemy, that rele…

She’s a goddess seeking vengeance as an FBI agent. He’s an agent seeking justice as a m…