I grew up when the idea of superheroes having their own movies was almost impossible, never mind their own shows! When Christopher Reeve flew across the screen in the first Superman movie, it was a Big Thing. Now we have a plethora of choices when it comes to movies and television – and here’s My Top Five list for superhero shows, past and present!

Flash barely beats out Arrow in this list, and only because I’m ticked off as hell at the amount of bad writing in the last two seasons for Arrow. And Flash makes it here for one reason alone – Caitlin Snow/Killer Frost. Watching her character develop from a sidekick scientist into her own story dealing with first gaining her powers, then losing them has been a delight to watch. Add in two failed relationships, and I’m rooting for Caitlin more than for “Run, Barry, run” these days. And who doesn’t love Jesse L. Martin???

I’ll admit – I was weeping when I saw the initial trailer for this, seeing Melissa Benoist leap into the air as Supergirl. Growing up, it was one of my favorite comic books and I was a little nervous about seeing how they’d adapt it to television. But it’s become a strong, heartfelt show with a big dose of realism and humanity, from Alex, Kara’s adopted sister discovering her sexual identity and coming out to her family and friends to the newest addition this season, a transgendered superhero dealing with hatred on a variety of fronts. Add in some major super villains and friends, and this is all I thought it could be.

Way back, in the old days, superhero television shows were few and far between, every week I’d race to catch Wonder Woman with Lynda Carter leading the charge for strong, female heroes. Starting back in World War Two, Wonder Woman every week fought Nazis and saved poor Steve Trevor. Eventually the storyline moved her into present-day where she worked as a secretary for Steve, helping fight Cold War baddies, but she still had her invisible jet and lasso. This was amazing for us young girls back then, seeing a strong female lead who didn’t put up with any guff! If you get a chance, please check this older series out and you’ll see why Gal Gadot had this old woman in tears, watching the present-day movie…

All I knew about this going in was what my husband, comic book history master, told me—and we were both blown away by this new show, now in the second season. Right from the start it hits you with real-life issues African-Americans have to face, from being harassed by law enforcement to educational issues. The opening scene has the main character, a high school principal, being pulled over in the rain and harassed by the local police. Good guys, bad guys and a hard reality makes this a must-see in our household.

I have to admit, I was a little apprehensive when I heard about a new series based on nothing but the “bad boys” and girls from the other series. Captain Cold was pretty cool on his own (ha-ha!) but could he hold his own in a full series? Well, I was proven wrong—under the leadership of Rip Hunter (and later on, the most magnificent Sara Lance) the Legends got through a shaky first season and burst out into full time-traveling pulp to lead the pack. From rewriting the legend of Helen of Troy to nasty unicorns at Woodstock to Obama being threatened by Gorilla Grodd (Yes, THAT Obama!) this show never fails to make me laugh. And these days, that’s very much needed.

Liam Wolfson, the professional assassin, is dead. His new persona, Jack Hammerson, lives in a small town in Colorado, happy helping out as many of the townsfolk as he can. It’s his way of working toward some kind of redemption for his sins. Until one night when an amnesiac woman falls into his arms, calling out his old name…

Kara remembers nothing about her previous life, only brief glimpses of an old lover and their time together… but she knows her fate is entwined with Liam’s. Then there’s the familiarity with all things Valkyrie and Valhalla. She worries she might be going crazy.

Liam has worked hard to hide all traces of his old life but Kara rips old wounds open as their old feelings for each other come rushing back. But it’s not just Kara who’s come to town looking for answers. When mercenaries arrive looking for Liam, he’ll need Kara to remember what she’s capable of if either of them is going to survive… 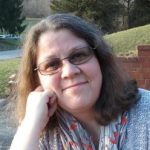 Sheryl Nantus is an award-winning romance writer published by Entangled, St. Martin’s, and Harlequin’s Carina Press. When she’s not writing about hunky heroes, she is sipping tea, playing board games and writing haiku. A total fangirl at heart, she met her husband through an online fanfiction community and currently lives in Pennsylvania.

We’re excited to present Olivia Twisted by Vivi Barnes! Her exclusive trailer is over a…