Like many girls, my mother taught me how to cook at an early age, mostly cakes, cookies, brownies, and pies. Desserts were about it. It wasn’t that my mother didn’t cook, she did, but it wasn’t her favorite thing to do. She worked hard during the day, and cooking was more of a necessity, rather than a passion. Lucky my mom was, when my Aunt Marion sent me Betty Crocker’s Cookbook for Boys & Girls, and woo hoo, was I in heaven! My culinary talents took off from there, and my mom loved me even more, because now I was able to help with the cooking. What mom doesn’t love it when she comes home from work and a meal is fully prepared and ready to go? It was a win-win all around! 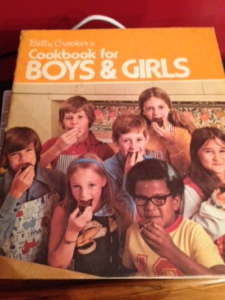 Since then, I’ve made recipes from cookbooks, culinary magazines people gift me subscriptions to all the time, and I’ve even created my own recipes from whatever was lying around the cupboard. There was a time, before my law enforcement career took off, when I’d hoped to make wedding cakes on the side, but then it seemed like I was working every weekend, which, of course, is when everyone gets married. Here’s a pic of a 4-tiered carrot cake I made for some friends and drove 200 miles with in the back of my mother’s station wagon all the way to Montauk Point on Long Island. To this day, I love making pretty cakes for entertaining, but don’t have much opportunity to make wedding cakes anymore. 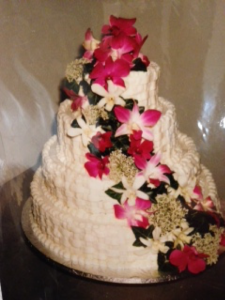 Regardless, I’m still cooking my little heart out and want to share a richly delicious, crazy-easy recipe for spicy country ribs that can be made in a slow cooker, or baked in the oven. Both methods are equally good. I can’t take credit for this recipe. I can’t recall who gave it to me, but it’s definitely “a keeper,” meaning one I’ve made many, many times.

optional: cornstarch to thicken sauce if you prefer it to be thicker

Combine the onion, ketchup, vinegar brown sugar, salt, Worcestershire, chili powder, and oregano in a 4- to 6-quart slow cooker or, if baking in the oven, a large Dutch oven. Add in the ribs and cover with sauce. Cook on low for 6 hours, or on high for 3 ½ hours. If baking in the oven, bake, covered, at 350 degrees for 2 ½ hours.

If desired, spoon off any fat that accumulates on the surface of the sauce, then thicken with cornstarch and water if you want a thicker sauce. Personally, I recommend thickening, so that all that yummy goodness sticks to the ribs. Enjoy! 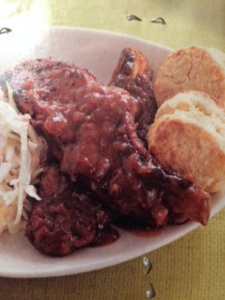 Now for the bloopers. Believe me, every cook has one, er, more than one. If they deny it, don’t believe ’em.

I’ll set the stage…Thanksgiving, decades ago…my mother prepared an enormous stuffed turkey, and all the fixings. The living room was packed with family and friends, sitting by the fire, anxiously anticipating a bounteous feast. Mom put everything, including the turkey, on the dining room table. My first dog ever, a Samoyed named Frosty, had a propensity to grab any food left on the counters, so in an effort to put distance between Frosty and the turkey, Mom thoughtfully closed the dining room door, then went into the living room to call everyone in for dinner. A minute or so later, our exuberant crowd charged into the dining room to find Frosty hunkered beneath the dining room table, chowing down on the turkey. Alas, in Mom’s haste to safeguard the turkey from a wayward scavenging canine, she accidentally locked Frosty inside the dining room—with the turkey! Sad, but true. Luckily, the local Chinese restaurant was open and we had Chinese turkey for Thanksgiving.

Another Thanksgiving fable, this one not quite so dramatic. We were at my Aunt Babs’s house in Long Island. My aunt tasked me with thickening the gravy, and handed me a jar of cornstarch. I made a slurry, whisked it into the gravy, which failed to thicken. I made more slurry, added that in, only to find the same results. No thickening. Finally, on a hunch, I stuck my finger into the jar of cornstarch, tasted it, only to discover—to my ultimate horror—the jar contained confectioner’s sugar, not cornstarch! Oh my. That was the sweetest, thinnest turkey gravy on record.

One last story… One night, I was preparing a side dish—shallots braised in red wine—for filet mignons my then-boyfriend, Ned, brought home. I set the shallots to simmer gently in the wine, garlic, and honey mixture, when Ned called me into the living room to eyeball five guys on TV, who were strutting around in martial arts pants only (as in, no shirts), doing some kind of kick-boxing type of dance. Well, let me just say, that I was “intrigued.” Minutes later (I can’t recall precisely how many) I smelled something burning. I bolted into the kitchen and, yup, you guessed it. My once lovely shallots were burned to a crisp. I believe the smoke detectors were screaming. Twenty years later, Ned still loves tormenting me with reminders of the “Shallot Incident.”

Not only do I write romantic suspense, but I love reading it. I recently started Karen Rose’s Monster In The Closet, and I look forward to seeing how it ends! 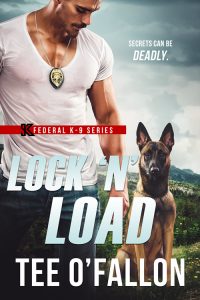 Crack CIA analyst Trista Gold is a whiz with the computer, but not so much with people. She hides behind her job, analyzing Top Secret code and making recommendations on national security. She doesn’t need a man in her life. But she will, very soon…

CIA K-9 officer Sgt. Matt Connors suspects that beneath Trista’s uptight appearance, there’s a sexy woman itching to cut loose. But he doesn’t dare act on his attraction. He’s a loner and always will be. Keeping away from Trista is a must-do directive. Until he doesn’t have a choice…

During a routine assignment, Trista stumbles across a cryptic exchange. She doesn’t think much of it…until someone tries to murder her—twice. Both times, Matt had been there to save her. But now she has to hide. And her new bodyguard, Matt, and his K-9 are the only hope she has against the powerful forces that want her dead. 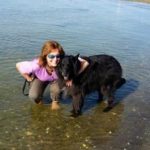 Tee O’Fallon has been a federal agent for twenty-two years, giving her hands-on experience in the field of law enforcement that she combines with her love of romantic suspense. Tee’s job affords her the unique opportunity to work with the heroic and sexy men in law enforcement on a daily basis. For Tee, research is the easy part! Besides reading and writing, Tee loves cooking, gardening, chocolate, lychee martinis, and her Belgian sheepdog.

It’s Not All in Your Head, Outbreaks are Becoming More Common by Julie Rowe

We can stop fanning ourselves over Brooklyn Skye’s HOT new cover.  We hope you love the cover …

When DIY goes right.   I have a not-so-secret kind of secret. I knit. A lot. And just li…

A writer spends a lot of their time writing or thinking about writing. Then there is the editing, pr…