While there are plenty of adorable characters in Love Actually, I love Jamie and Aurelia. Maybe it’s the communication breakdown or their sweet timidity? Maybe it’s that he’s a writer and she’s confident enough to call him on his stuff? Whatever it is, they make me smile!

When she brings him tea

And tries to figure out what he’s writing…

And he admits (even though she doesn’t understand) how much he loves driving her home.

And she admits she doesn’t like leaving him – even though he doesn’t understand.

When he finishes working at his writing cabin, the good-bye is heartbreaking!

But Jamie won’t give up. No language barrier will stop this guy!

The reunion is EPIC perfection! And not just because Aurelia learned English – ‘Just in Cases’…

Here’s to a Jamie and Aurelia kind of love!

Grab Rescued by the Wolf by Sasha Summers for just 99¢! 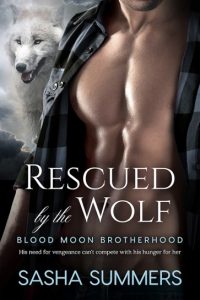 Mal wants one thing in life—vengeance against those that deserted him and those who tortured him. But rescuing a wounded girl from their captors, one that wreaks of innocence and fear, makes Mal put his plan on hold. Temporarily. He’ll do what he needs to keep her alive and safe, even if it changes both of their lives forever.

Being stabbed and held in a dark cell wasn’t on Olivia’s top ten list. Her savior isn’t exactly hero material. Angry, scarred, and pissed at the world, he seems to resent being saddled with her. But the longer they’re together, the more firmly a connection forms between them. A connection that binds her to him, his pack, and his world. But that connection may just lead to her death. 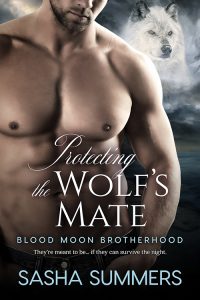 Ellen has one goal: vengeance. With little memory of her life before her imprisonment by a maniacal werewolf, her world has been full of pain, humiliation, and fear. But now that she’s been rescued, her need for revenge is challenged by the urge to be part of a pack… and the unshakable connection to, Hollis, the man her wolf claims as their mate.

Hollis will do whatever it takes to protect his pack, and that includes looking after Ellen, who doesn’t need or want his help. He’s determined to keep her safe, even though she’s hell-bent on revenge, even if that means sacrificing himself. And it might come to that when the big bad comes back for the one woman he can’t live without. 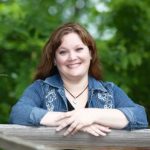 Sasha grew up surrounded by books. Her passions have always been storytelling, romance, history, and travel. An Air Force brat who cut her romantic teeth on Barbara Cartland novels, she was always looking for a prince or hero of her own. While waiting, she wrote her first play for her Girl Scout troupe. She’s been writing ever since. She loves getting lost in the worlds and characters she creates; even if she frequently forgets to run the dishwasher or wash socks when she’s doing so. Luckily, her four brilliant children and hero-inspiring hubby are super understanding and supportive.When she’s not conversing with her book characters or reading into the wee hours, Sasha is an unapologetic movie addict. Growing up, movie night was important and dressing up for the annual Oscars party was, according to her family, something ‘everyone did’. As a result, Sasha has a wealth of information and knowledge on a wide range of films – their actors, directors, scores, and other useless bits of Hollywood trivia. She often ‘casts’her books when writing—creating at least one new Pinterest board per book. Chris Hemsworth, Jensen Ackles, and Tom Hardy are some of her favored leading men.

The Origin by Jennifer L. Armentrout tour kicks off today! Jennifer will be visiting blogs with fun …

Nina Croft has this special giveaway for you to help her celebrate the release of DEADLY PURSUIT. Wi…

We often get the question, “Where did you get the idea for a heroine with DID/MPD, and we fig…