Sometimes when I’m writing I latch onto a song and listen to it over and over again.  I just put it on repeat and let my imagination go, the ear worm flowing through my head.  I’m not sure how that fuels my creativity, I just know it does. Here are five songs I listened to over and over again while writing Cuba Undercover.  You will notice they all have a Latin theme and are full of passion and fire, as are my two characters Rebecca and Antonio.

What songs have inspired you to press play and repeat over and over again?

You Sang to Me

Get Cuba Undercover by Linda Bond for just 99¢! 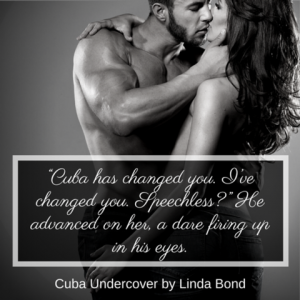 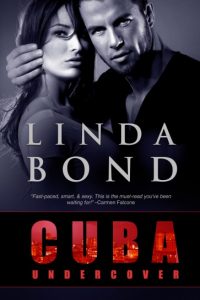 His revenge will change her life forever…

Cuban-American TV reporter Rebecca Menendez’s success comes from playing by the rules. When she’s kidnapped by a fierce and intensely handsome man who needs her help, however, all of those rules seem pointless. Nothing could have prepared her for being taken hostage…or the irresistible reward if she complies: information about her long-thought dead father.

Antonio Vega has spent almost every day of his adult life dreaming of revenging his father’s death. With his sister’s life and freedom in jeopardy, Antonio isn’t taking any chances. But once Rebecca and Antonio are in Cuba, they’re immersed in a world of corruption, deceit, and betrayal. It’s a deadly game…and there are no rules. 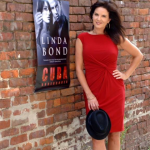 Linda Bond is an Emmy award winning journalist by day and an author of romantic adventures by night. She’s also the mother of five, four athletes and an adopted son from Cuba. She has a passion for world travel, classic movies, and alpha males. Linda currently lives in Florida, where the sun always shines and the day begins with endless possibilities. You can become a Bond girl and share in her continuing adventures at www.lindabond.com.

As long as I can remember, I’ve loved music. I’m fascinated by the way music can brigh…